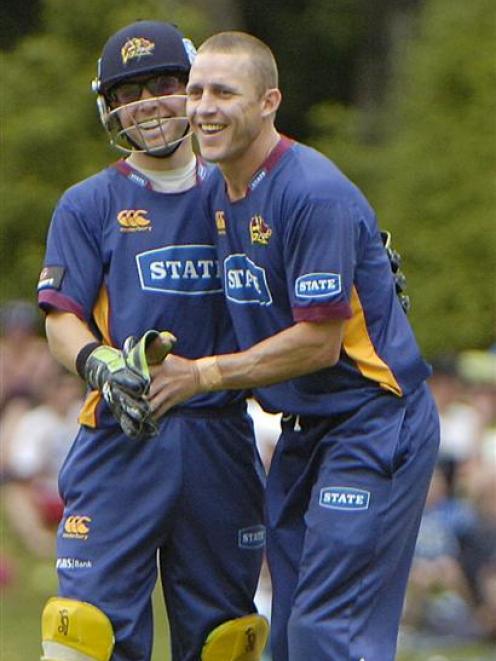 
The opener has been one of the form batsmen in the competition and entertained a crowd of 1130 with a clever knock as Otago compiled 191 for four at the University Oval yesterday.

Redmond's opposite Brad Wilson kept Northern Districts in the hunt with a superb innings of 91 from just 53 balls.

The part-time bowler missed out with the bat but had a fine day at the bowling crease, taking four for 23 from three overs to help snuff out Northern's chase.

The visitors reached 170 for eight with some lusty hitting at the death by Daniel Flynn.

That helped close the gap in what was otherwise a convincing victory.

The win means Otago has won four of its five games and is well placed to make the final with three round-robin games remaining.

The pair have been in good touch, scoring four 50-run plus partnerships in five innings.

"I think that certainly set the game up," Otago coach Mike Hesson said.

"That was a superb twenty/20 innings."

Rutherford was undone on 27 when he mistimed a pull shot but Redmond continued the onslaught, whacking four sixes and seven fours.

The innings featured some exquisite cricket shots but there was also a liberal sprinkling of invention as he lapped and dabbed the ball into gaps.

He was in no mood to let veteran spinner Bruce Martin settle and went after the bowler from the moment he was introduced.

Martin eventually got his man but not before Redmond had put Otago into a solid position.

Mascarenhas took the long handle, whacking three sixes and five fours on his way to 55.

But once he got out the innings lost some momentum and Greg Todd and Warren McSkimming could only manage three runs from the last over.

Wilson might have got within sight of a twenty/20 century but his innings should have ended on five when Sean Eathorne got both hands to thick edge at short third man.

Wilson's effort was largely a lone hand, though.

And as the wickets kept tumbling and the run rate spiralling upwards, the situation became more and more desperate for the visitors.

But before Scott went, Northern lost another two wickets in the 17th over with Kane Williamson offering a catch and Te Ahu Davis suffering the indignity of being run out without facing a ball.