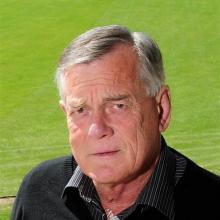 Dykes played cricket for Auckland and was an accomplished wicketkeeper-batsman.

After a 12-year stint as a selector for Auckland, Dykes was part of the New Zealand selection panel between 1990 and 2005.

That 15-year period included four-years convener of selectors between 1996 and 2000, with his most notable decision coming in early 1997 when his panel oversaw the selection of an 18-year-old Daniel Vettori as New Zealand's youngest test player.

In this period he was also the manager of several New Zealand teams, taking sides to Bangladesh, India, Pakistan, South Africa, England and Australia.

An Auckland man through and through, Dykes moved to Dunedin in 2005 to take over the role as the chief executive of the Otago Cricket Association.

He served that role successfully for a decade, the most significant development during his tenure being the establishment of the University of Otago Oval as New Zealand's seventh Test venue.

Dykes, who is survived by his wife Sue, four children and three grandchildren, acted for several years as an NZC match referee, overseeing first-class games, List A matches, and women's internationals.

Match officials and Black Caps players were wearing black arm-bands in Monday night's third T20 against the West Indies to recognise Dykes' service to the game in New Zealand.