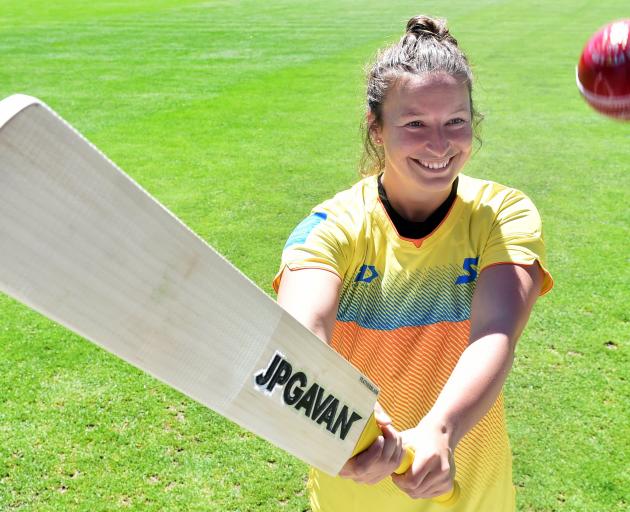 New Otago recruit Hayley Jensen prepares to take a swipe at the ball at the University of Otago Oval earlier this week. Photo: Peter McIntosh
White Ferns all-rounder Hayley Jensen is hoping to complete the circle this season.

The Cantabrian started her career as batsman who could bowl. But her opportunities at the international level came as a bowler who could chip in with some handy runs in the lower order.

However, the 27-year-old feels she can offer more with the blade and has transferred south to Otago this season to work on her batting.

''I just felt I should have a change this year,'' Jensen said.

''The culture down here was more what I was looking for and especially the opportunities with the bat.

''In the 50-over game I feel like I can be a senior player almost and kind of a mentor to the younger girls, as well.

''That will be a little bit of a change but that would be cool.''

Jensen, who has played eight ODIs and 20 T20s for her country, was batting in the lower middle order for Canterbury. But she will slot in at No4 for Otago in both formats.

The Sparks will be desperate for their new recruit to prosper.

White Ferns duo Suzie Bates and Katey Martin will be missing for a good chunk of the season.

Fellow international Leigh Kasperek has transferred north to Wellington, and the Sparks are also without wicketkeeper-batsman Polly Inglis and left-armer Kate Heffernan.

That is a lot of quality to lose or make do without.

''I want to be a genuine all-rounder. I think over the last few years I've been classified as a bowler who can hit.

''But I want to do more than that and that is why I came here - to look for more batting opportunities.''

Jensen learned her cricket in the backyard. She had to bowl endless overs at her brother, Jared. But batting has always been a big part of her game.

''Hopefully I get more opportunities and really take them this season.''

Jensen, who lives in Australia, said the decision to move to Otago rather than another association was made easy.

Bates offered her accommodation and Martin ''kind of talked me into it a little bit''.

''They are my role models, as well. Having been led by them in the New Zealand team, it will be good to play with them in the Super Smash.''

It is a big year for the White Ferns. South Africa is touring and the ICC Women's Twenty20 World Cup gets under way in Australia in February.

Jensen wants to be involved in both and success for Otago in her new role will greatly enhance her chances.