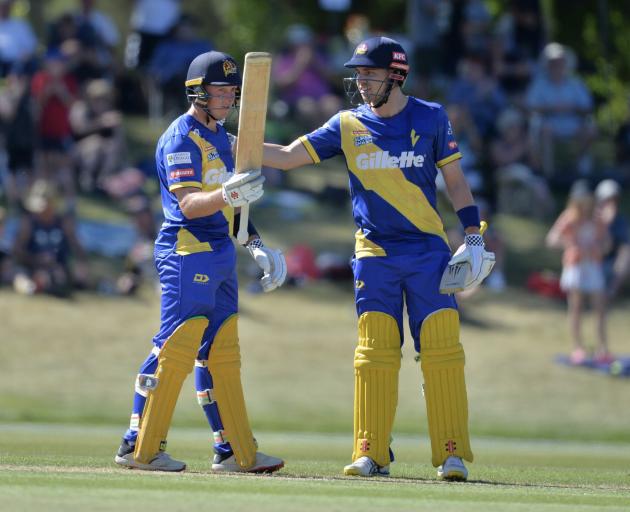 Llew Johnson acknowledges the crowd as Mitch Renwick congratulates him after he scored 50 runs during the Otago Volts match at Molyneux Park against the Auckland Aces yesterday. PHOTO: GREGOR RICHARDSON
Stand back — Llew Johnson is at the crease.

The 20-year-old Otago top order batsman announced his arrival with a stunning innings to help the Volts record a 45-run win against Auckland under the baking sun at Molyneux Park yesterday.

He clubbed seven sixes and two fours in a wonderful knock of 72 from 44 deliveries.

The Volts broke the ground record with an enormous tally of 219 for seven.

An appreciative crowd of 1683 gathered under the trees for shade and watched as Auckland wrestled with the mammoth task.

That struggle wilted early. Star Black Caps batsman Glenn Phillips joined two of his team-mates in the dressing room when he holed out in the deep for one.

His brother Dale Phillips took the catch. It was a good one too. He ran swiftly backwards and clutched it above his head.

He also featured in three run-outs in a top effort in the field.

Glenn Phillips' wicket was huge. He was the one player who could potentially have got them there.

The Aces slipped further off the pace with the wickets of Sean Solia (30) and Robbie O'Donnell (18).

Ben Horne padded his average with a career high 62 — a nice effort in a lost cause.

Auckland was eventually bowled out for 174.

Mitch McClenaghan went for 50 in his debut in Otago colours.

But Matt Bacon nabbed three for 18 and Anaru Kitchen got the key wicket of Glenn Phillips.

However, Johnson was the headline act.

‘‘You always hope for guys to do well when they get a go, so it was great to see,'' Volts coach Rob Walter said.

‘‘I thought it was a great knock. He was able to increase his strike rate throughout his innings and that was probably the hallmark of it.

‘‘He rotated the strike early, got himself in and then pushed on from there.''

The right-hander got his first chance for Otago since 2017.

He had earned his spot on the back of a club double hundred and a century for Otago A.

Johnson had the luxury of being able to settle at the crease thanks to the extra time the openers had bought with their onslaught.

Hamish Rutherford swatted 25 off 13 balls and Neil Broom clouted five fours and a six in his 30-run 13-ball cameo.

Johnson needed a super-sized slice of luck on 12. He hit a high catch so easy he had started leaving the ground before having to scamper back to beat the incoming throw.

But at the halfway point in the innings the Volts were 101 for three and on track for an enormous total.

Johnson was looking increasingly comfortable. He put the ball high on the embankment twice in a row and he started walking at bowlers.

And, oh boy, he bought up his maiden 50 in tremendous style. He crunched the ball over extra cover for six and celebrated by whipping the next over the rope as well.

Mitch Renwick joined in the fun to remind everyone there was another batsman in the partnership.

Otago is back in the action today when it hosts Canterbury at the same venue.