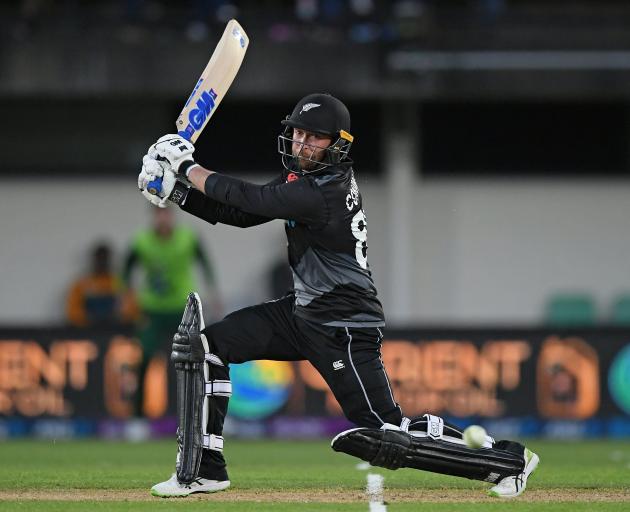 New Zealand batsman Devon Conway hits the ball firmly square of the wicket during his innings of 63 in the third and final twenty20 against Pakistan in Napier last night. PHOTO: GETTY IMAGES
Pakistan avoided a 3-0 T20 series sweep with a four-wicket win at McLean Park in Napier last night.

New Zealand posted a reasonable tally of 173 for seven. But opener Mohammad Rizwan smashed a career-high 89 from to 59 deliveries to seal victory in the last over.

Black Caps leg-spinner Ish Sodhi limped off clutching his hamstring in his 50th T20 for the Black Caps.

He had only bowled one over so that left the home side with fewer options.

Martin Guptill injured his index finger while attempting a catch, so that robbed the Black Caps of a quality fielder.

Pakistan pair Mohammad Rizwan and Mohammad Hafeez (41) blasted 72 off 51 balls for the second wicket and arguably it should have been academic thereafter.

But Tim Southee grabbed two wickets in the penultimate over to cause a few flutters in the Pakistan dressing room, and Rizwan holed out in the last over to add some more drama.

Earlier, Tim Seifert’s prolific series stalled a little. The nuggety wicketkeeper-batsman notched 57 in the opening match and 84 not out in Hamilton on Sunday.

And he was in marvellous touch early on last night. He hit the first delivery he faced through the covers for four and danced down the wicket to slap a six in the next over.

The 26-year-old right-hander draws on power and leans on audacity to build an innings.

But Pakistan had a several good moments during the powerplay — none better than the dismissal of Kane Williamson.

He chopped on before he could get established and Martin Guptill’s promising knock was snuffed out on 19.

Then Seifert got a very decent ball from Faheem Ashraf which nipped back and bowled him for 35.

If there was an upside to the flurry of wickets it was the arrival of Wellington left-hander Devon Conway at the crease.

He combined with Glenn Phillips (31) to help shield the middle order from some creeping pressure.

Conway has been the best batsman on the domestic scene for several years and he shouldered the responsibility of batting deep into the innings.

But when he needed to find the boundary he was able to lift the tempo.

He is not a power player but he does possess rare timing and impeccable placement.

The South African-born 29-year-old exploited those skills to help stroke 16 runs off the 18th over.

Scott Kuggeleijn muscled 14 runs from six deliveries and Conway was eventually out for 63 in the final over.

Faheem Ashraf was the best of the Pakistan bowlers with three for 20.

Pakistan got through to 40 before its chase suffered its first setback. Daryl Mitchell pulled off a stunning catch just moments after replacing Guptill on the field.

He hauled in a one-handed effort after Haider Ali spooned a leading edge into the off-side and seemingly over the fielder.

It was the first of three catches the super substitution made.