Perrett named to play in NZ Asia Cup side 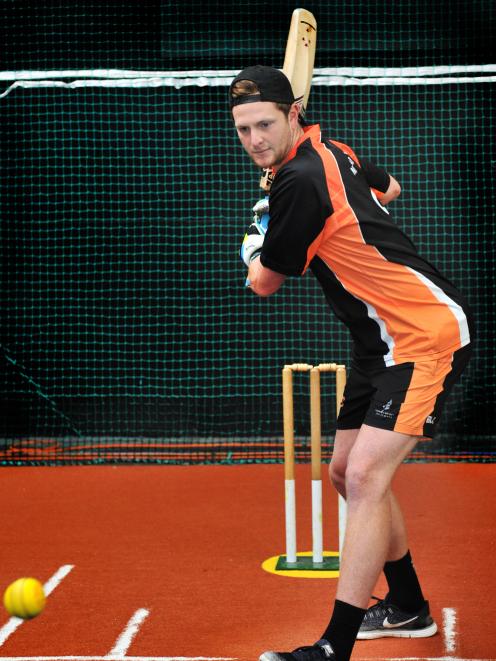 Corey Perrett shows his skills at Metro Indoor Sports in Dunedin yesterday. PHOTO: CHRISTINE O'CONNOR
National cricket representatives are a bit of a rare breed in the south at the moment.

Gone are the days of a bucketful of men wearing the blue and gold going on to play for their country.

But Corey Perrett is bucking the trend.

Perrett (22) has just been selected for the New Zealand indoor cricket team, and will play in the Asia Cup in Singapore in April.

Perrett also plays cricket outdoors and turns out for the North East Valley senior side.

He enjoys both forms of the game, but it is the indoor version where he is making his mark at the moment.

"I suppose I like the speed of the indoor game - the game can be over in an hour to an hour and a-half,'' he said.

"Just the intensity of the game, the way every ball matters. Every second matters, really. It is 16 overs for each side so you have to be alert - while in the outdoor game you can go through some lulls where it just sort of ticks over.

"But it is one of those things that when you are starting to get sick of one, the season finishes and you get a chance to play the other.''

Indoor cricket is seen as more of a winter sport, though its popularity is nowhere near where it was back in the 1980s and 1990s.

Perrett first took up the sport about 10 years ago and kept working on it when he was at Palmerston North Boys' High School. He started to get more serious about the game as his schooling neared an end, and has continued to play while studying.

A right-hand batsman and right-arm bowler, Perrett said as everyone had to have a hand in all facets of the game, most players were all-rounders.

"You are basically using the same skill set, [in both games] but the biggest difference is probably in the fielding. In indoor cricket you have to be a lot more reactive. You can't be too specialised as you are all over the place.''

Perrett is one of two new players in the team which will travel to Singapore for the tournament. The New Zealand side will compete against the host country along with India, Sri Lanka and Malaysia.

Australia and New Zealand are the two heavyweights of indoor cricket internationally, so Perrett said with the Australians not attending the tournament, New Zealand would be out to win it.

Perrett - who is completing a PhD in biomechanics, and in his sixth year of study at the University of Otago - was involved in club play in Dunedin, but played for Central Districts in last year's indoor cricket provincial tournament, as Otago did not have a team.