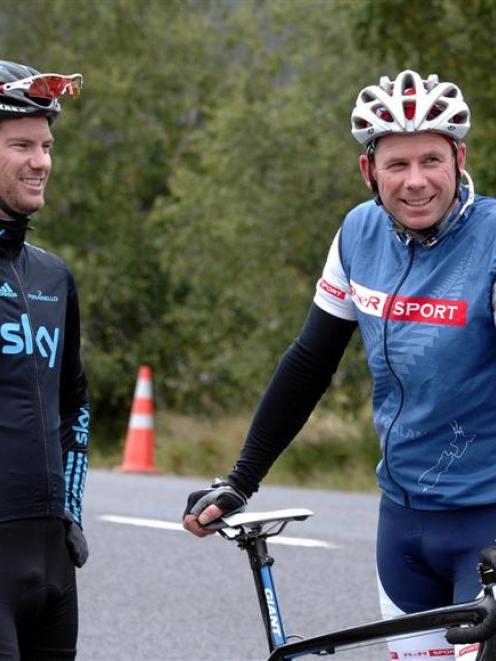 Champion international cyclist Greg Henderson (left) talks with the president of Cycling Otago, Chris Henderson, before the Wingatui 60km circuit race at Wingatui on Saturday. Henderson, now living in Girona, Spain, is back home in Dunedin for Christmas. Photo by Linda Robertson.
The thing with New Year's resolutions is most of us have rather modest goals.

You know, lose a few pounds, give up smoking, get some more exercise - that kind of thing. Bucket lists are pretty similar.

Mere mortals tend to be satisfied with a picnic at the Eiffel Tower, stringing together a few tunes on a guitar or jumping off a bridge with a bungy cord wrapped around their ankles.

Former Dunedin cyclist Greg Henderson has set the bar a lot higher. It has been his dream to compete in the Tour de France and to win a medal at the Olympic Games. And if things go well next year, he might get to tick both boxes.

The 35-year-old, who has returned to Dunedin to visit family and friends before Christmas, told the Otago Daily Times he switched allegiances from Team Sky to Lotto Belisol recently with the specific goal of getting a ride in the Tour de France.

"There were a number of reasons but the underlying reason was to have an opportunity to ride the Tour de France," Henderson said.

"It is no secret that I got overlooked for the last two years. To them, it is just a business. It is a British cycling team and they wanted as many British riders as they can.

"The last conversation I had with Dave Brailsford (team manager) was... if they took me to the Tour de France this year, for example, they would have only had two British guys in the whole team."

Lotto Belisol is a Belgian-based team shaped around star sprinter Andre Greipel. He also happens to be a good friend of Henderson's.

"I started talking with Greipel during the Tour de France this year and said, `Look mate, I've had enough of being neglected by Sky'.

"The worst-kept secret in cycling was that Mark Cavendish was joining Sky. Obviously he is the fastest guy in the world at the moment and is going to be the No 1 sprinter.

So I thought I'm going to be put to lead-out duties there anyway and I'd rather lead out a friend than lead out Mark Cavendish, especially after what Sky had put me through. So we started talks with Lotto.

"It has really worked out in my favour. Greipel helped me with my negotiations. Basically he said he won't sign his contract until you sign Greg Henderson.

That helped a heck of a lot."

Greipel wants Henderson leading him out in the sprint finishes and that bodes well for the 2004 scratch race world champion. If he can stay fit and maintain his form, that elusive ride in the Tour de France should become a reality.

About a week after the greatest cycling event in the world concludes there is another pretty big sporting occasion happening in London.

Henderson would dearly love to be part of the New Zealand Olympic team which contests the road race. He believes Julian Dean and himself have the experience to perform well on a course which suits them.

"It is almost perfect for me.

"That is perfect for me and the sort of situation where I can win, so I'm really excited about it."

There is a big hurdle to get over first - selection. While Henderson and Dean are undoubtedly the country's two best road cyclists, there is no guarantee New Zealand will qualify two riders for the event.

There is also a school of thought a track cyclist might get the nod ahead of Dean or Henderson. With the men's track team limited to just nine riders, picking someone who could cover the teams pursuit would improve its chance of success and allow an extra track sprinter to be picked.

"There is a rumour they will pick two track guys for the road race so they have more chance in the teams pursuit.

"But what happens if the teams pursuit finishes fourth at the Olympics? Will that be a success? I can jump up and down about it but, at the end of the day, what can I do about that?

"If they deny Julian Dean and I a spot at the Olympics, on a course that suits us, it is going to be a joke around international cycling."