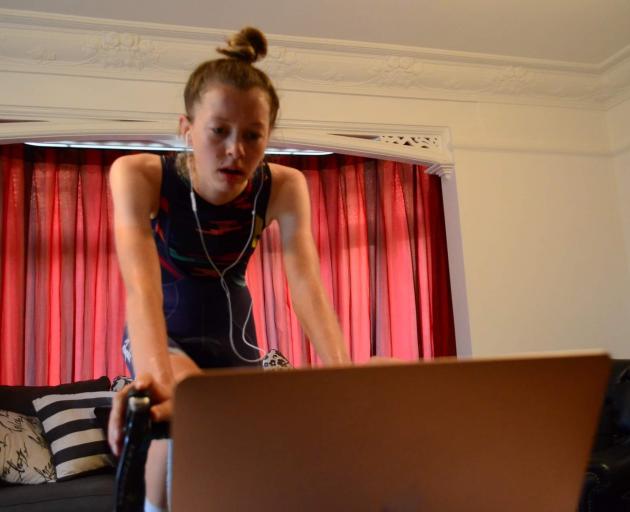 Ella Harris works from home in April. The Dunedin pro cyclist will be back on the road in Spain this weekend. PHOTO: SUPPLIED
Dunedin professional rider Ella Harris is set to resume competition after fleeing Spain in March.

Harris was hoping for a strong second year with the Canyon-SRAM team when she decided to return home due to the Covid-19 pandemic.

The 22-year-old had a promising season ahead of her and was hoping to make the team to contest Giro Rosa in Italy.

It is the most prestigious tour in women’s road cycling. Instead, she found herself back home in Dunedin and clocking up the kilometres in her parents’ living room.

However, professional cycling has resumed in Spain and Harris has been named in the team which will contest the 113km Durango-Durango Emakumeen Saria on Sunday. She joins team-mates Alena Amialiusik, Tanja Erath, Hannah Ludwig, Lisa Klein and Omer Shapira.

"I'm not alone when I say I'm filled with a little trepidation," Harris told Spanish media.

"Everyone's in the same boat when it comes to not having any on-road racing in the legs. My goal is to put my nerves behind me, and to approach the races as if it was mid-season."

While Harris has not be competing on an actual road, she has been busy on a virtual track earlier this month.

She competed for her team in the virtual Tour de France, held on the online training and racing platform, Zwift.

Harris logged in from her home in Dunedin in the early hours of the morning.

She was the best of the Canyon-SRAM riders on stage five of the virtual tour and helped Canyon-SRAM claim the white jersey for the youth classification.

Harris actually gained her spot on the team after winning an online contest in 2018.