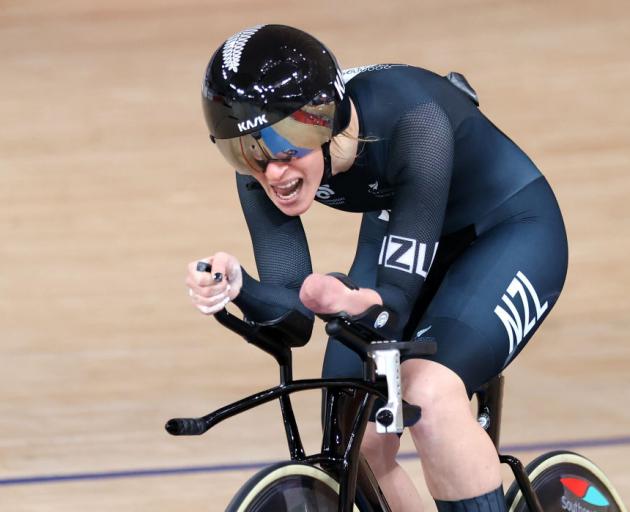 Nicole Murray,competes for the bronze medal in the track cycling Women’s C5 3000m individual pursuit on day one of the Tokyo 2020 Paralympic Games at Izu Velodrome in Izu, Japan, yesterday. PHOTO: GETTY IMAGES
The New Zealand contingent made a rocky start to its campaign in Tokyo, with athletes taking centre stage in the pool, at the velodrome and on the wheelchair rugby court.

Cyclist Nicole Murray led the way with her performance in the women’s 3000m individual pursuit (C5), qualifying for the bronze medal race with the fourth-fastest time yesterday.

It was a tight race in the bronze medal showdown for the majority of the contest, with about half a second separating her and French counterpart Marie Patouillet heading into the final 1000m.

However, Patouillet finished stronger of the two, crossing the line more than five seconds ahead of Murray.

For the first time since 2008, New Zealand qualified for the Paralympic Games’ wheelchair rugby event and it had the tough draw of facing 2016 silver medallist the United States first up.

The Wheel Blacks were playing from behind the whole game after USA got off to a flying start, scoring the first three goals of the game. The US led 29-17 at halftime, before pushing the lead right out in the third quarter.

Ultimately, the Americans claimed a comfortable 63-35 win. The New Zealand team will now turn its attention to their next match, against Great Britain tonight.

Jesse Reynolds was the first New Zealander in action in the pool, finishing seventh in his heat in the men’s 400m freestyle (S9) event.