0 Comments
Two-time champion Michael Vink has made a major claim for a third title on stage two of the SBS Bank Tour of Southland.

The Cantabrian was quick to thank his Transport Engineering Southland-Talley’s team-mates after a challenging 172km stage from Invercargill to Lumsden which featured two gravel sections for the first time.

“Everyone was talking about the gravel and luckily my team have got quite a lot of experience with that stuff. We made a good plan, everyone was on the same page and had a job. Everyone played their role to perfection and at the end of the day we got the stage win, so it couldn’t have gone any better,” he said.

“(The gravel) is tough on the equipment and the body, but it also suits me so well. It’s great to mix up the race and keep it exciting. I think everyone was sensible and that’s the key to making it work.”

Vink’s mountain biking background was a bonus during the gravel beats, the second of which was a 5km grind up the Glenure hill, but it was his time trial ability which came to the fore as he attacked from the front group into a block head win over the final 15km into Lumsden. 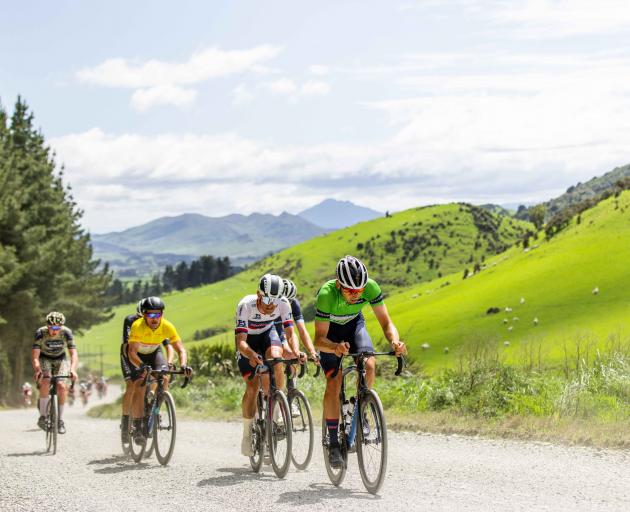 A group of riders containing eventual stage winner Michael Vink (second right) traverses a gravel section during stage two of the Tour of Southland, a 172km ride from Invercargill to Lumsden, yesterday.PHOTO: HARRY TALBOT/TOUR OF SOUTHLAND

Cappel was desperately unlucky to puncture twice on the first gravel section as the peloton broke apart in the windy conditions.

After climbing over the Glenure hill, the remaining escapees were hauled in by a chasing bunch including Vink and Campbell Stewart, but it was Vink who had the horsepower to solo his way up the main street of Lumsden.

Logan Currie was second on the stage to hold the under-23 jersey, with Keegan Hornblow third.

Vink, who finally broke through to win Southland crowns in 2018 and 2019, was comfortable with the responsibility of wearing the yellow jersey for today’s 148km stage three from Riverton to Te Anau.

He has a 12sec lead over Currie, with Hornblow at 22sec and Stewart at 29sec.

“Any time you can take the yellow is a good thing, especially in this race. It’s so windy and tough that I like to be on the front and have the boys on the front anyway,” he said.

“Every day is a big day. Any day can be the hardest day on the tour — even yesterday with the city race. The morale is really high in the team. Everyone is having a laugh and it’s such a good vibe to be a part of.”

Fouche was rewarded for his efforts in the break with the sprint ace and King of the Mountain jerseys, while Glenn Haden continues to lead the over-35 category and Amouroux claimed the Most Combative honours.