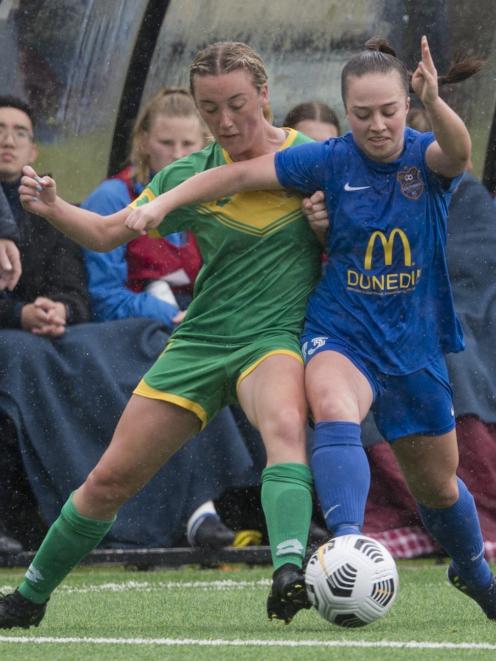 She has certainly provided plenty of reasons to be looked at, as well.

Two games into her Southern United career, she has already proven a lethal threat on the right wing.

On debut for the team, she delivered the final pass to set up the goal which ultimately sank Canterbury United, her former team, on her old home turf.

Last week, she scored a fantastic goal to put Southern in front in its 3-1 win over Central.

It has certainly shown her to be a quality addition to the Southern squad, which faces Capital in Wellington today.

However, the opportunity to regularly show her class at national league level was something that has eluded her until now.

Dias played twice for Canterbury United last season, although the quality of that squad limited her time on the park.

Her move to Dunedin, while predominantly for study, has brought with it the added bonus of more game time.

It was something she hoped might put her on the radar of the next-level teams, including the national age-grade set up.

‘‘I’m hopefully trying to get seen this year, more time on the ball, more chances to get my name out there. I’m really enjoying being coached under Graeme [Smaill] as well.’’

Dias has only been playing on the women’s scene for the past three seasons.

Before that she had come through the grades playing for a Selwyn United boys team.

Eventually she found the boys too big and fast to keep up with, but she felt it had helped her technique and knowledge of the game.

Two years ago she moved to play in the Mainland Women’s Premier League with Halswell United, while also joining the Canterbury United shadow team.

‘‘I really enjoyed the transition,’’ she said.

‘‘It was difficult because the boys game was fast and very much playing at your feet.

‘‘The girls game is a lot more space and running on to it and trying to do more things with it, which took me a bit of time to get used to.’’

She moved south this year and has just completed the first year health science programme, with a goal of doing dentistry.

That would mean she would likely be in Dunedin for ‘‘a long time’’.

Dias had found the football, both with Dunedin Technical and Southern, good since arriving.

She was expecting a tough match against Capital today, the South Central Series’ other unbeaten team.