Football: Arsenal get revenge over Liverpool 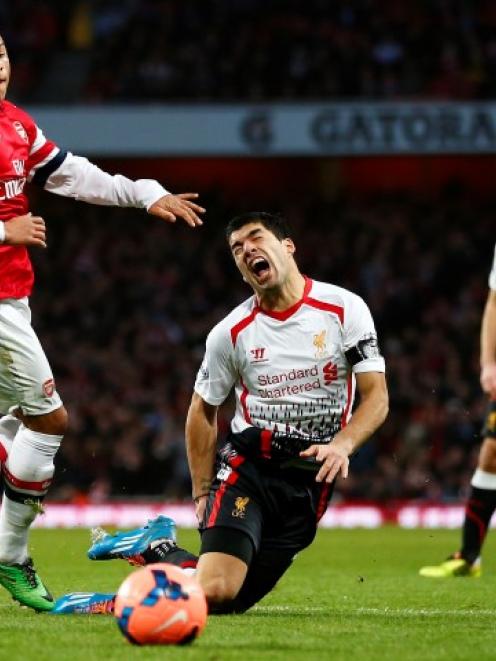 Liverpool's Luis Suarez reacts to a challenge in the penalty area from Arsenal's Alex Oxlade-Chamberlain (L). REUTERS/Darren Staples
Arsenal, thumped 5-1 in the Premier League by Liverpool last weekend, have taken sweet revenge at the Emirates with a 2-1 win in the fifth round of the FA Cup.

Visiting manager Brendan Rodgers, however, was furious his side were denied a "blatant penalty" by 2010 World Cup final referee Howard Webb in the second half.

Arsenal will be at home again in the quarter-finals, having been drawn against Liverpool's local rivals Everton.

Arsene Wenger's team were in control when they led 2-0 shortly after halftime, Alex Oxlade-Chamberlain scoring the first goal after 16 minutes and then created the second for Lukas Podolski.

Podolski then conceded a penalty for a trip on Luis Suarez and it was converted by Liverpool captain Steven Gerrard in the 60th minute.

Liverpool felt they should have had another penalty for an Oxlade-Chamberlain challenge on Uruguayan Suarez soon after but Webb turned down their strong appeals.

"I thought it was a blatant penalty," Rodgers told BT Sport television. "Luis got a touch on the ball and young Alex has just taken him out."

Wenger was less certain that it was a spot kick. "Maybe, maybe not," said the Frenchman before adding: "I'm very proud of the way we responded to the huge defeat last week".

Earlier, Liverpool started the tie well but missed two early chances that fell to England striker Daniel Sturridge who had scored in his previous eight games.

Arsenal went ahead when a shot by French Under-21 international Yaya Sanogo, making his first start, fell kindly for Oxlade-Chamberlain to pounce.

Podolski made it 2-0 before Gerrard's penalty launched a Liverpool fightback.

Arsenal held on for victory, though, to gain a huge boost ahead of Wednesday's Champions League last-16 first leg at home to holders Bayern Munich.

Liverpool will now focus solely on the Premier League. Rodgers's men are in fourth place, four points behind leaders Chelsea.