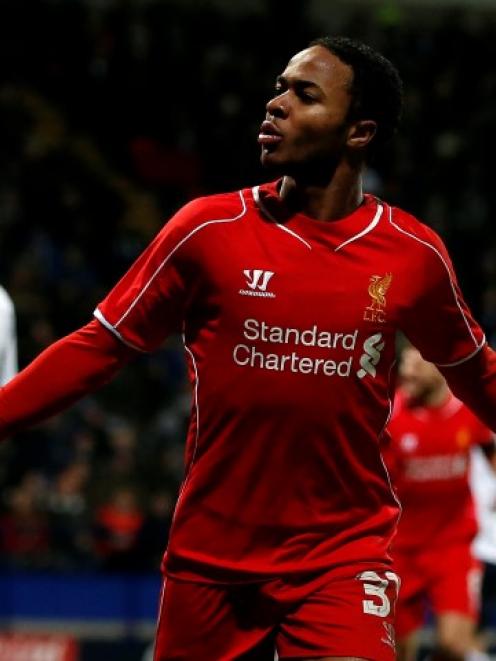 Liverpool's Raheem Sterling celebrates after scoring against Bolton Wanderers at the Macron Stadium in Bolton. REUTERS/Andrew Yates
Last-gasp goals from Raheem Sterling and Philippe Coutinho helped Liverpool reach the FA Cup fifth round and avoid the giant-killing fate of many of their Premier League rivals with a 2-1 replay victory at second tier Bolton Wanderers.

The hosts took the lead when former Chelsea and Barcelona striker Eidur Gudjohnsen coolly slotted home a penalty before Bolton were reduced to 10 men when Neil Danns was sent off after receiving two yellow cards.

But Sterling volleyed in the equaliser with four minutes left and a long-range Coutinho strike in stoppage time won the fourth-round replay for the Premier League club.

"It was always going to be a tough game," Liverpool manager Brendan Rodgers told the BBC.

"Neil Lennon's done a brilliant job at Bolton. Going 1-0 behind away from home put us on the back foot. We must have hit the bar about five or six times but eventually the quality came through."

Liverpool, who next face an away tie at Crystal Palace on Feb. 14, will fancy their chances of launching an assault on the trophy after the exits of Premier League heavyweights Chelsea and Manchester City.

Both fell to lower league opponents in a remarkable series of FA Cup fixtures in which Manchester United were taken to a replay by fourth tier Cambridge United before they too eased through with a 3-0 replay win.

Liverpool and Bolton had played out a goalless draw at Anfield and the replay started in the same fashion, with Bolton defending stoutly to shut out an attacking Liverpool side.

Bolton took the lead against the run of play when the 36-year-old Gudjohnsen rolled back the years to strike from the spot.

The hosts were reduced to 10 men when Danns received his a second yellow card for a rash challenge after being booked for a similar tackle in the first half.

The dismissal gave the visitors an invitation to push forward led by captain Steven Gerrard who was making his 700th Liverpool appearance, but the former England captain was subdued.

Just as the Bolton defence looked to be standing firm in the face of a red onslaught, Sterling steered in a precise volley to equalise.

Coutinho, who signed a new five-year contract at Anfield this week, proved his worth when his dipping strike from 25 metres flew in via the underside of the crossbar to send Liverpool through. 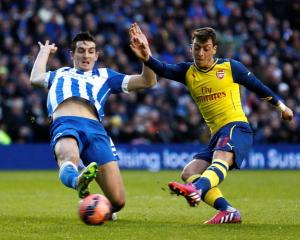