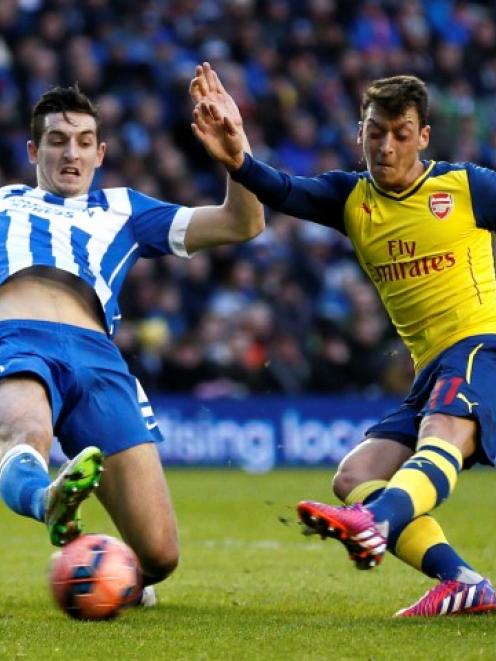 A day after Chelsea and Manchester City were stunned by Bradford City and Middlesbrough respectively, Arsenal resisted Brighton's charge as goals from Theo Walcott, Mesut Ozil and Tomas Rosicky helped them to victory.

West Ham United had substitute Diafra Sakho to thank for sparing their blushes against League One Bristol City as the Senegal international headed Andy Carroll's cross home in the 81st minute to send the Hammers through to the fifth round.

Aston Villa, hoping the FA Cup would provide welcome respite from their Premier League struggles, also secured their place in the next round thanks to a 2-1 victory over Championship (second tier) leaders Bournemouth.

Carles Gil, who signed from Valencia earlier this month, scored a stunning effort to put Villa in front on 51 minutes before Andreas Weimann added a second.

Callum Wilson scored a late consolation for Bournemouth, but Villa stood firm to deny the Championship side a replay.

Arsenal fans would have been forgiven for feeling a little uneasy at a trip to the south coast after watching Premier League rivals Chelsea and Manchester City fall in round four.

But their nerves were calmed just 89 seconds in when Walcott neatly controlled Calum Chambers's cross and fired a shot past David Stockdale to score his first goal in over a year after a lengthy spell on the sidelines with an ankle problem.

Arsenal continued to pin Brighton back in their own half and German World Cup-winner Ozil, making his first start since October, doubled the Gunners' advantage when he collected Rosicky's pass and slid the ball into the net.

Brighton gained a lifeline when Chris O'Grady held off Mathieu Flamini's challenge and kept his composure to strike the ball past Wojciech Szczesny.

Rosicky restored Arsenal's two-goal advantage with an exquisite volley from the edge of the box but Brighton striker Sam Baldock set up a nervy finish for the holders when he delicately clipped the ball over the on-coming Szczesny.