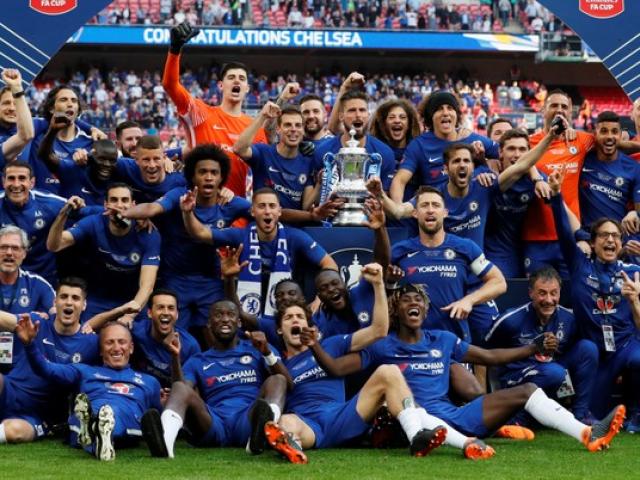 Eden Hazard's first-half penalty proved decisive as Chelsea salvaged their season by beating Manchester United 1-0 in the FA Cup final in what is widely expected to be manager Antonio Conte's swansong.

Crystal Palace set up a repeat of the 1990 FA Cup final against Manchester United after Yannick Bolasie and Connor Wickham secured a 2-1 victory over Watford at Wembley.

Romelu Lukaku scored two goals for Everton, one demonstrating rare strength and skill, to knock his old side Chelsea out of the FA Cup 2-0 in a dramatic quarter-final featuring two red cards.

Aston Villa will meet holders Arsenal in the FA Cup final next month after goals from Christian Benteke and Fabian Delph gave them a 2-1 win over Liverpool in a pulsating semi-final at Wembley.

Second-tier Reading booked an FA Cup semi-final meeting with holders Arsenal at Wembley after brushing aside 10-man Bradford City 3-0 in their replay.

Liverpool were left frustrated by Championship side Blackburn Rovers who defended heroically to draw 0-0 at Anfield and force a replay in their FA Cup quarter-final.

Manchester United survived a scare to beat League One Preston North End 3-1 in the FA Cup fifth round on Monday and set up a mouth-watering quarter-final against Arsenal.

Last-gasp goals from Raheem Sterling and Philippe Coutinho helped Liverpool reach the FA Cup fifth round and avoid the giant-killing fate of many of their Premier League rivals with a 2-1 replay victory at second tier Bolton Wanderers.

Holders Arsenal were made to sweat by Championship side Brighton and Hove Albion before eventually prevailing 3-2 in the fourth round of the FA Cup to ensure they did not fall foul of another upset.

Tottenham Hotspur stormed back from 2-0 down to beat Burnley 4-2 in their FA Cup third-round replay despite resting their top striker in the once-fabled competition.

Captain Steven Gerrard scored twice to rescue Liverpool from FA Cup embarrassment and lead them into the fourth round after a tricky 2-1 win at fourth tier AFC Wimbledon.
Former winners Coventry City were knocked out of the FA Cup after suffering a surprise 2-1 home defeat by non-league Worcester City in the first round of football's oldest domestic cup competition.

Arsenal beat FA Cup holders Wigan Athletic 4-2 on penalties to win their FA Cup semi-final at Wembley Stadium after they fought to a 1-1 draw after extra time.

FA Cup holders Wigan Athletic have proved Manchester City's nemesis for the second time in less than a year, with a shock 2-1 quarter-final victory over Manuel Pellegrini's talent-laden side.

Yannick Sagbo kept Hull City in the FA Cup with a late strike in their 1-1 fifth-round draw at second tier Brighton & Hove Albion to prevent an upset.

Arsenal, thumped 5-1 in the Premier League by Liverpool last weekend, have taken sweet revenge at the Emirates with a 2-1 win in the fifth round of the FA Cup.