Football: Gerrard double gets Liverpool out of trouble 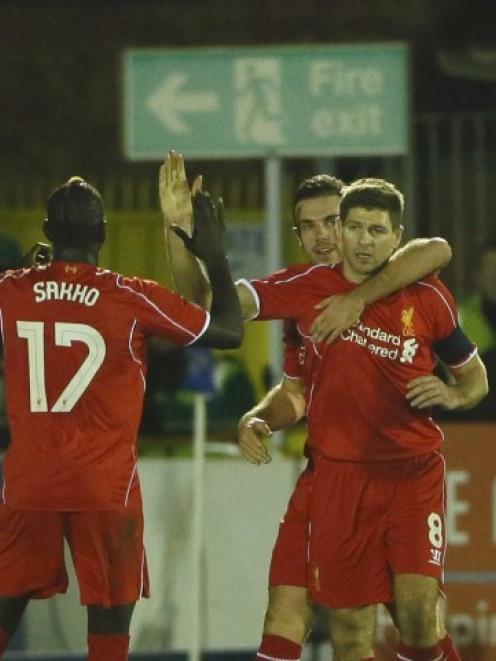 Steven Gerrard (R) celebrates with Liverpool team-mates after scoring against AFC Wimbledon during their FA Cup third round match at Kingsmeadow Stadium in Kingston-upon-Thames. REUTERS/Stefan Wermuth
Captain Steven Gerrard scored twice to rescue Liverpool from FA Cup embarrassment and lead them into the fourth round after a tricky 2-1 win at fourth tier AFC Wimbledon.

In the night's other Cup match, Premier League strugglers Burnley fought back from a goal down at Turf Moor to draw 1-1 with Tottenham Hotspur and force a replay to decide who then takes on Leicester City.

Liverpool will move on to play second tier Bolton Wanderers in the next round but only after a night of living dangerously with determined League Two opponents who looked far from overawed.

"That was a very tough game," Liverpool manager Brendan Rodgers told the BBC. "We lost our sort of shape within the game and presented them with chances by giving the ball away.

"We had to defend right the way through to the end."

Gerrard, in his first match since announcing his departure for the United States at the end of the season, had headed the opener in the 12th minute as Liverpool looked set for a comfortable win.

But the match at Kingsmeadow, reviving memories of 1988 when the original Wimbledon 'Crazy Gang' beat Liverpool in a hard-tackling final at Wembley, refused to follow the script.

Lifelong Liverpool fan Adebayo Akinfenwa, a stocky striker nicknamed 'The Beast', had the home fans dreaming when he poked in a 36th minute equaliser from close range after some woeful defending by the Merseysiders.

The hefty 32-year-old, who has played for 11 clubs in a journeyman career around the lower leagues, was perfectly placed to cash in after the ball bounced back off the bar following a goalmouth scramble.

With a major upset looking possible, and Wimbledon missing several clear chances, Gerrard settled nerves with a curling free kick into the top corner in the 62nd minute.

"I always enjoy the FA Cup, I grew up loving the competition and to play in it. It's going to be my last time and I want to make the most of it and try and go all the way," the midfielder, who turns 35 on Cup final day, told the BBC.

"It's the beauty of the FA Cup," added Gerrard of Wimbledon's spirited performance. "It doesn't matter where you are, in what league, form seems to go out of the window and it becomes a leveller.

"Fair play to them. I think their manager can be very proud of them. They gave us a real test."

Burnley's match against in-form Spurs brought back memories of the 1962 final, won by Tottenham, but there was little glamour in a dire first half.

Spurs took the lead through a Nacer Chadli strike from close range in the 52nd minute but Sam Vokes side-footed in an equaliser in the 73rd.

"It was a lacklustre game, with little atmosphere. We did everything to try and get a result," said Burnley manager Sean Dyche of a match watched by a crowd of only 9,348 spectators.