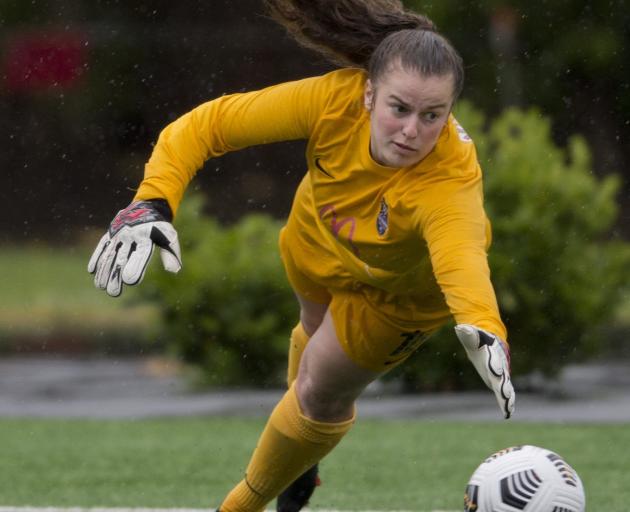 Southern United goal keeper Amy Simmers makes a save against Central during the last meeting between the teams, three weeks ago at Logan Park Turf. PHOTO: GERARD O’BRIEN
Playing in Palmerston North is not quite a home comfort for Amy Simmers.

It will certainly offer plenty of familiarity for the Southern United goalkeeper, though.

New Plymouth would be a true home game for the 18-year-old.

But her two seasons playing for Central, which plays its home games at Massey University, will mean there should be few surprises for her.

It will not be her first time playing against her old team.

She was in goal when Southern beat Central 3-1 in the South Central Series at Logan Park Turf three weeks ago.

That had involved "a bit of pressure", especially as Southern had toppled Canterbury United a week earlier.

This time around the unbeaten tag would be gone, although she admitted it would likely be a bigger game for her than most.

"You could say that, I guess — I am from Central," Simmers said.

"Hopefully, we can win. My parents are coming down. It’s bit of a drive for them."

That drive was one Simmers got to know well during her high school years.

As a 15-year-old she and a friend trialled for the Central team.

She had not expected to make it.

But when some regulars moved away, she got a call-up.

It did not take long for her to play her way into the starting line-up and she was regularly saving goals against the country’s best players.

That also gave her a good introduction to the road between New Plymouth and Palmerston North.

She would make the drive once a week for training, as well as for home games.

After having the next year off national league football, she returned to the Central team last season.

However, the team’s regular keeper had returned.

That made for a lot of travel — three hours each way — to sit on the bench.

It certainly made Simmers appreciate the proximity of Arana College to Logan Park this year.

Simmers came south to study first-year health science, hoping to get into medicine.

She had found the football set-up good upon arrival, Simmers said.

"It’s been really good. There’s a lot of really strong players, especially coming from New Plymouth, where the quality is perhaps not as high. I think it’s really helped me to improve.

"... back when I was in Central, I’d only train with that team once a week. So the other trainings would be lower quality.

"Now it’s up to three times a week. I can roll down the hill and it’s so good. And training with Tom [Stevens], an actual goalkeeping coach, it’s quite good."

It had been a timely arrival, too.

She had made several quality saves in the team’s three-match winning streak to open the season.

Last week she was came off midway through the second half, after a potential head knock — following a series of others in past years.

However, she has been cleared to play.

A 3-0 loss to Capital last week had put a dent in Southern’s title hopes.

However, it remained two points off top spot with two games left, and Capital had a tough match against Canterbury United Pride this weekend.

Simmers is not the only ex-Central player in the Southern team.

Captain Rose Morton is also from the region and will play against her Football Fern sister, Sarah.

Kick-off is at noon.