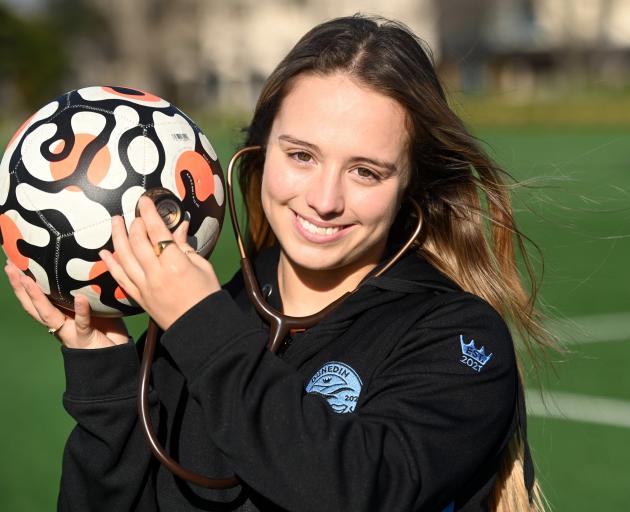 Dunedin City Royals star Margarida Dias takes a break from her medical degree at the Logan Park Football Turf yesterday. PHOTO: LINDA ROBERTSON
Margarida Dias has a new perspective on the pressures of a big game.

There will be plenty at stake on Sunday in Christchurch, as well.

It follows a 3-0 loss to the same opponent at the same venue at week ago.

Yet the game will be the 19-year-old’s escape for the week — as it is every chance she has to take the field now.

Dias spends most of her time with her head in books, sitting in lectures and attending labs these days.

She has started a medicine degree at the University of Otago.

It is a notoriously difficult, and time-consuming, course.

But rather than cast football to the side, as many talented athletes do when they get to university, Dias has found it complements her day-to-day life.

"I find football a really good escape from studying medicine," she said.

"I study many hours in a day and my brain gets a bit scrambled. Having trainings Tuesday and Thursday nights is a good breather.

"Then the games is a great release to put everything on the field and just focus on the game. I’m managing to balance the two pretty well."

That did not mean Dias was any less motivated on the field.

The second-year student has netted 13 goals for the Royals during their unbeaten Southern Premiership season.

She backed that up with a quick-fire brace against Cashmere Technical two weeks ago, lifting the team to a 3-1 win and clinching a spot in the South Island Championship final.

It was a performance that has continued to thrust her name into the spotlight, which has grown ever brighter since arriving in Dunedin.

She has shown her pace and ability to create with the ball at her feet over the past two seasons, and was among the key players in last year’s champion Southern United team.

When she arrived in Dunedin she admitted she felt as though she had not been seen but surely people are starting to take notice.

Playing for New Zealand remains a dream for her, and she is considering taking up futsal — alongside football — as a potential route to do that.

She will get the chance to make a further name for herself against a familiar outfit on Sunday.

Dias grew up playing men’s football in Christchurch, moving across to the women’s game three years ago.

Two years ago, before moving to Dunedin, she started for the Coastal Spirit team the Royals will face.

While she said they were "just another team" while the game was happening, she admitted the Royals were very keen to avenge last weekend’s loss.

Playing at English Park and in front of her family would make her feel more at home in the road game.

Her experience for the other side might give the Royals some useful information in preparation, too.

"I’ve tried to give my team the inside scoop," she said.

"But I think they’re just a very composed, well experienced side. And they have such a big family environment and a good team culture.

"But I think we’ve got some good tactics to go up against them as well."

Sunday’s game is the first of two significant ones for the Royals this month, the Kate Sheppard Cup semifinal against Northern Rovers to follow in two weeks.