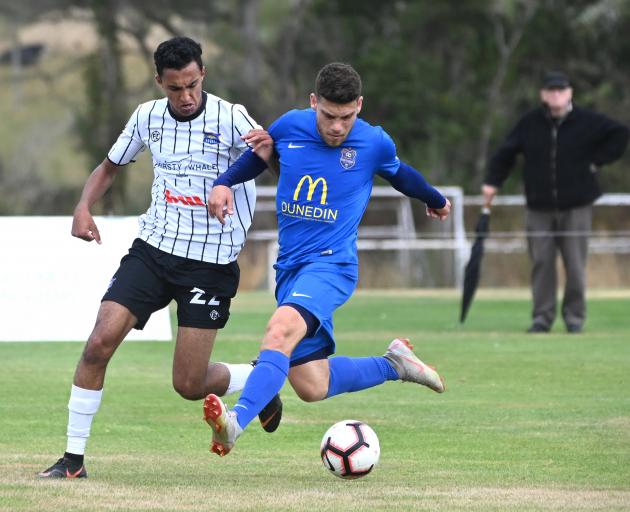 But Southern United just could not put this one away.

It was held to a 2-2 draw by a feisty Hawke's Bay United side at Sunnyvale Park yesterday.

Southern dominated the first half, applying pressure and creating plenty of opportunities.

Goals seemed inevitable; even more so when the visiting team was reduced to 10 men early on.

But it did not happen.

Hawke's Bay answered both times Southern went up, and then held on to split the points.

Southern assistant coach Terry Boylan said the side was disappointed not to win.

However, it was still viewing it as a point gained, rather than two lost.

"There were some parts of the performance that were good, but then there were others that were sloppy and we let ourselves down.

"That's being realistic about it.

"We're trying to be positive about everything, but I think everyone knows it was a poor result against a 10-man team.

"The guys were wanting to play really well and maybe just a bit too much passion hindered their performance today."

Southern started well, pushing the pace and getting the ball behind the Hawke's Bay defence.

It attacked dangerously up the left wing, where Ben Deeley, Garbhan Coughlan and Abdulla Al-Kalisy were lethal early on.

Coughlan headed into the net in the 12th minute, but was called back for offside.

Hawke's Bay responded with its own attack and had an appeal for a penalty turned down.

As play returned quickly to the other end of the pitch, Southern capitalised on its pressure.

Markus Fjortoft made a break up the left sideline and put a ball ahead to Al-Kalisy.

He made his way into the box and laid off a pass to Azariah Soromon, who scored.

Hawke's Bay protested the goal, resulting in the visitors' Cameron Lindsay being shown a red card.

The drama continued 30 seconds later, when Southern's Danny Ledwith was deemed to have handled the ball while blocking a shot in the box.

Paul Ifill buried the penalty in the goal's bottom left corner to tie the scores.

From there Southern continued to apply pressure.

It regularly got in behind the Hawke's Bay defence and created several clear-cut chances.

Soromon went the closest, nearly making it two when he rattled the post from outside the box.

Coughlan put Southern back in front, after Ledwith won a turnover and put the ball through to Al-Kalisy running on to it.

He found himself in the open with just the goal keeper to beat, and passed to Coughlan, who tapped it in.

Hawke's Bay continued to fight, though, and got the equaliser right before halftime.

Josh Murphy put a great ball into the box for Maxime Olivier, who finished well.

From there Southern could not fully break down the Hawke's Bay defence.

It had several chances in the second half, although none quite as clear as those in the first.

The result moves Southern to 23 points and secures it a top six finish for the second consecutive season.