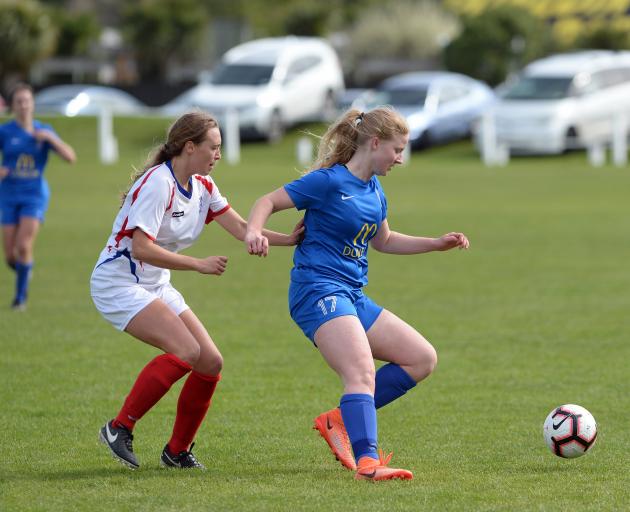 There was a time when she would have refused to take a penalty.

Self-doubt would creep in and she would overthink the game.

But the Southern United striker has overcome that.

She has netted four goals in as many games in this season's national women's league.

That has included stepping up to the penalty spot several times, as well as a screamer from outside the box against Northern.

It follows a winter when she scored 38 goals in 14 games for the Queenstown Rovers.

Alongside winning golden boot, she also claimed Football South's young sportswoman of the year and women's most valuable players awards.

It is something she will be hoping for more of as she lines up against Capital at Logan Park today.

"I think it's just a lot of going back to basics, getting self-belief," she said of her confidence.

"Everyone has a bad game. It's acknowledging you're not always going to be perfect; there's no such thing.

"If you strive for perfection you're always going to be disappointed.

"I guess it's kind of rolling with the failure and knowing that to succeed you need to fail as well."

A year 13 pupil at Dunstan High School, Hislop lives in Clyde and travels to Dunedin once a week to train.

She has also played for Queenstown in the southern women's premier league for the past six years.

That had been tough at first, although she felt in the long-run it had helped her improve.

She propelled herself on to the national scene and was in the mix for last year's New Zealand under-17 team.

After making several cuts she was one of the final four to miss out on the squad for last year's World Cup - where the side got third.

A debut for Southern soon followed, although glandular fever restricted her to three games last season.

She was set to return for Queenstown, before a rolled ankle left her out for a further six weeks.

Since then the goals have come readily.

Instinct has taken over and Hislop has shown her ability to score freely.

The travel will soon be something she has to do less of as well.

She plans to come to Dunedin to study at the University of Otago next year, although is unsure which club she will play for.

Coming off a bye, Southern is looking to bounce back from its first loss of the season today.

It is third on the table with seven points, three ahead of the Capital side that picked up its first win in a 3-2 defeat of Central last week.

Kickoff is at 1pm.