Golf: Patient Tiger back at the top in a major 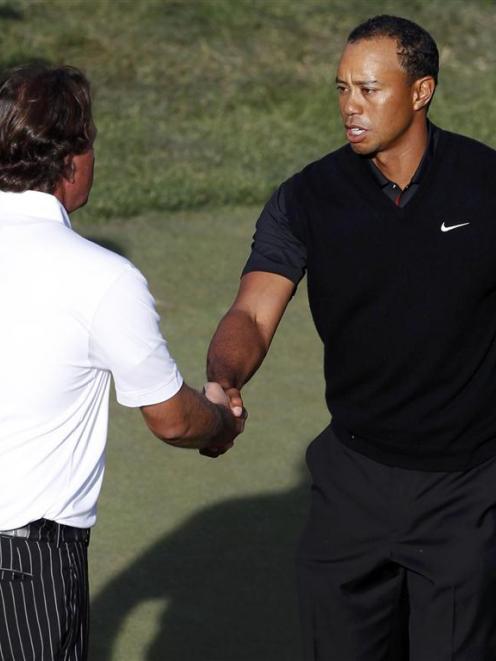 Phil Mickelson and Tiger Woods shake hands on the 18th green during the second round of the 2012 US Open golf tournament. REUTERS/Matt Sullivan
It was not easy going in swirling winds on a lightning-fast layout but Tiger Woods was delighted be back in the position he covets after moving into a tie for the lead in the second round at the US Open.

Four long years after he last won a major title, Woods stayed patient on the frustratingly difficult Lake Course at the Olympic Club, grinding out a level-par 70 to join fellow Americans Jim Furyk and David Toms at the top of the leaderboard.

"I'm right there in a good spot," Woods told reporters after making a few errors, hitting several superb shots and suffering one or two bad breaks before ending the day at one-under 139.

"This tournament, you are just plodding along. This is a different tournament. You have to stay patient, got to stay present, and you're just playing for a lot of pars.

"This is not a tournament where we have to make a bunch of birdies. You've just got to hang in there with a bunch of pars."

The 14-times major champion felt his second-round 70 was better than his opening 69, given how much faster the brutally challenging layout had become.

"Absolutely it was probably better," Woods said after mixing three birdies with three bogeys in the second round. "Even though I didn't miss a shot in the last three holes, I ended up with just three pars.

"It was one of those days where you just had to be so patient. If the wind wasn't blowing, it wouldn't have been so bad.

"That golf course was some kind of quick. It got dried out. It was really, really tough. You just had to stay as patient as possible and I did a really good job of that today."

One of the worst breaks Woods suffered on Friday came at the par-five 17th where he struck what initially appeared to be an exquisite soft four-iron for his second shot.

The three-times US Open champion watched in horror as his ball bounced short of the green, then rolled all the way over the back and 40 yards down a hill into a run-off area.

"I thought I threw it up high enough to land it soft enough and evidently it didn't," Woods said. "Then I'm down there in a spot where it's as tough to get it close, and I thought I did a pretty good job of that."

Woods salvaged a par on that hole, and also the last, to remain in a three-way tie for the lead at the championship's halfway point, a position he has relished over the years.

Eight times out of nine when he has held at least a share of the lead after 36 holes at a major he has gone on to win.

"As far as being in that position, I like it," said the former world number one, who clinched the most recent of his majors at the 2008 US Open. "I know that it takes a bit out of us, but so be it.

"I'd much rather be there than missing cuts or just making the cut. It's a wonderful place to be with a chance to win your nation's Open."