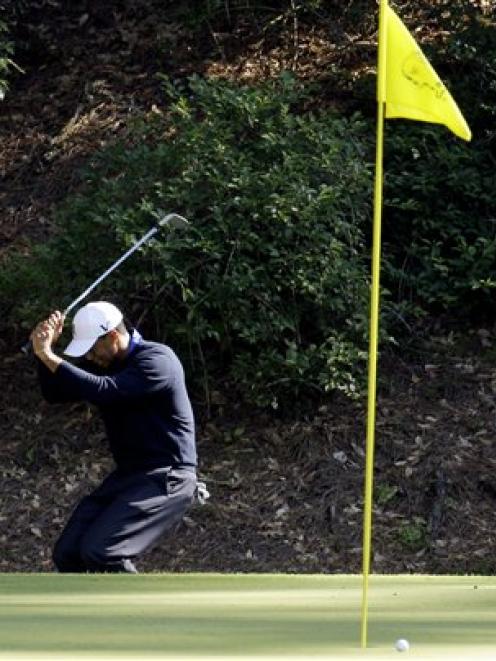 Tiger Woods reacts to missing a birdie chip on the 12th green. (AP Photo/Charlie Riedel)
Tiger Woods' body language said it all as he huffed and puffed and almost blew his Masters chances with his worst score at the tournament in eight years.

The former world number one came into the week riding a wave of momentum after ending a two-and-a-half-year title drought on the PGA Tour but laboured to a three-over-par 75 in the second round at Augusta National.

Woods looked distinctly uncomfortable at a venue where he has triumphed four times, especially over the closing stretch where he kicked a club in frustration at one point and ended the day eight shots off the lead.

The biggest problem for the 14-times major champion was old habits creeping back into a swing he has grooved with coach Sean Foley over the last two years.

At the par-five 15th, Woods steered a four-iron approach into the crowd standing to the right of the green, scattering the fans as they dashed for cover.

At the par-three 16th, he pushed his tee shot into a greenside bunker before throwing his nine-iron to the ground in disgust and kicking it away.

"I think we can safely say Tiger has lost his game ... and his mind," six-times major champion Nick Faldo said on the Golf Channel.

While Woods expressed his frustration after posting a three-over total of 147, he felt he still had a chance of clawing his way into contention over the weekend.

"Last year I think on the final round I made up seven shots. I can do this. I've just got to be patient.

"Obviously I've got to cut that deficit down tomorrow with a good, solid round and then got off to a quick start on the front nine on Sunday and see where that puts me."

Woods won his first PGA Tour event in 30 months at last month's Arnold Palmer Invitational and came into this week's Masters as the tournament favourite.

However, his old swing habits have intruded in each of his first two rounds at Augusta National but he is convinced he can remedy the problem.

"I know what to do, it's just a matter of doing it," said Woods, who had previously shot 75 at Augusta National in the first and third rounds of the 2004 Masters.

"I've just got to stay patient with it and keep doing the reps and eventually it'll become where it's second nature."

Woods said the old habits had especially affected his takeaway with a full swing since his victory last month at Bay Hill.

"It's just not quite consistent," he added. "It's not what it was at Bay Hill and prior tournaments.

"I have it in stretches. I get into streaks where it's really good and then I lose it for a little bit. That's obviously very frustrating."