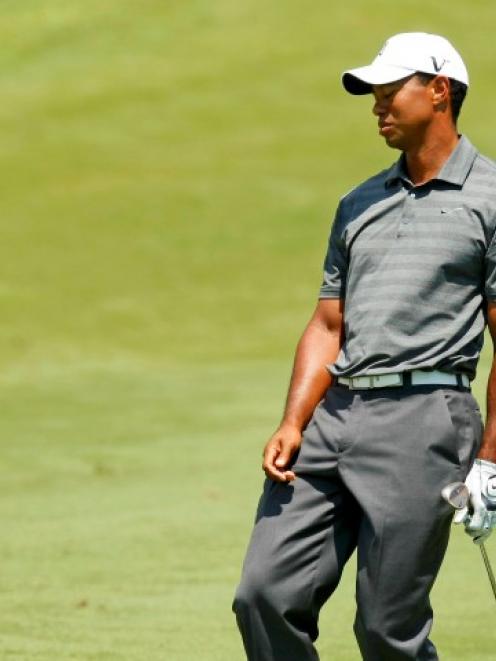 Tiger Woods reacts after his approach shot on the fourth hole during the first round of the Players Championship PGA golf tournament at TPC Sawgrass in Ponte Vedra Beach, Florida. REUTERS/Chris Keane
Tiger Woods risks missing consecutive cuts for the first time in his career unless he recovers from the two-over-par 74 he shot in the opening round of the Players Championship.

Woods missed the cut at last week's Wells Fargo Championship and, despite "hitting it really good" in his warm-up, he again looked out of sorts.

A bogey on his first hole, the 10th, was hardly the start he was hoping for at an event widely regarded as golf's unofficial fifth major, and there were four more to come in a round which featured just three birdies.

"It certainly wasn't the most positive start. Any kind of momentum that I would build, I would shoot myself in the foot on the very next hole. Just one of those days," said Woods, who withdrew from last year's Players Championship because of injury after nine holes at the TPC Sawgrass.

The former world number one, who slumped to his worst-ever Masters finish as a professional last month when he tied for 40th, said he had been the victim of some bad luck on Thursday.

"I hit three decent shots in there and got some of the worst lies. The best shot I hit all day was on 3 and I ended up in a spot where I really couldn't play from," said Woods.

Woods was also annoyed by the clicking of a spectator's cellphone camera during one stroke.

While fans are allowed to carry their phones at PGA Tour events they are not allowed to take video or pictures.

"We don't mind it, just put it on silent. It's not that hard but they don't," said Woods. "It can cost guys tournaments because a shot on Thursday is the same as a shot on Sunday.

One of the few bright spots for Woods came on the par-three 17th hole where he drove to 13 feet on the island green and made birdie to get to even-par after eight holes.

But it was on the four par-fives, once meat and drink for Woods, where he struggled to make up strokes with the par-five second the only one he birdied.

"You need to take care of the par-fives ... it usually determines how you finish in a tournament," said Woods. "I haven't done a very good job of it, I really haven't lately. I certainly need to do a better job of that."