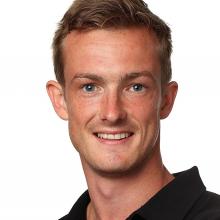 Hugo Inglis
There will be plenty of experience returning for both Black Sticks sides in Auckland tomorrow.

Both the men’s and women’s teams have recalled veterans to play Belgium in the FIH Hockey Pro League.

Double centurions Steve Edwards and Simon Child are back for the men, while Kayla Whitelock and Gemma McCaw have been named in the women’s line-up.

The 2020 Pro League, in its second season, will have a different format to last year.

Teams will play half of their opponents at home and the other half overseas.

The Black Sticks will host Belgium, Great Britain, Argentina, the United States and Spain — each of those sides will play two matches in New Zealand.

Men’s striker Hugo Inglis said it would be a good lead-in to the Tokyo Olympics later in the year.

"It’s a pinnacle year for us, and the side is building nicely towards that," he said.

"We are hopeful of putting on some strong performances in front of our home crowd."

They face a tough challenge tomorrow against a a world champion Belgium team ranked No1 in the world.

It possesses threats all over the field and is coming off two wins against Australia.

The home side faces a Belgium team which held world No2 Australia to two draws last weekend.

Black Sticks midfielder Sam Charlton said backing up good performances would be key for the side this year.

“One of the key focuses for the team this year is going to be consistency.

"We can play a game that goes well, it is going to be important that we back that up every game this year."

Defender Megan Hull added it would be good to expose the younger players in the community to the game’s top level.

The women begin at 5pm at the National Hockey Centre, while the men follow at 7.30pm.