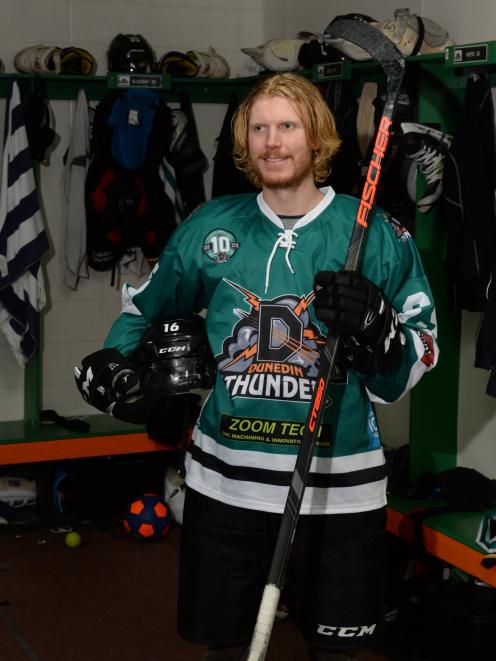 Paris Heyd
The domestic ice hockey season has been given a reprieve.

It was confirmed the New Zealand Ice Hockey League will go ahead in a reduced capacity.

The league was initially suspended in March due to Covid-19. It will begin in Dunedin on August 21, when the Dunedin Thunder hosts the Stampede.

They will meet again the next night.

From there the three South Island teams will play each other in home and away double-header weekends.

The two Auckland teams, the West Auckland Admirals and Botany Swarm, will play each other in two double-header weekends as well.

From there a finals series will be played in both Queenstown and Auckland, between the North and South top teams.

Dunedin Thunder star Paris Heyd said it was exciting the league would be going ahead.

"We always hoped something would happen," he said.

"I think what they’ve decided to do is a good solution.

"It’s a bit of a shorter season and keeps it a bit more regional with all the travel costs and everything else, it makes it a bit cheaper this year.

"Definitely excited we get to play some games."

He said while there had been uncertainty, he had always felt as it would be a case of what the season would look like, rather than if it would happen.

The players had been back on the ice since the gathering limit was raised to 100.

A local league had been going for the past six weeks, and the Thunder would start training next week.

It had a month to get ready, although he said all teams would be in the same situation as far as a shorter pre-season went.

"Everyone’s in the same boat, so it’s not like we’re disadvantaged in any way.

"We’ve been playing for the last six weeks or so, everyone’s been on the ice barring a couple of players who have had other commitments.

"A month lead-in should be plenty — it’s just getting a bit of chemistry in line, a bit of structure in place."

Also manager of the Dunedin Ice Stadium, Heyd said the league was good news from a stadium perspective, too.

It had a good run of events until October, but the NZIHL was its biggest spectator drawcard.