Stampede makes most of weekend 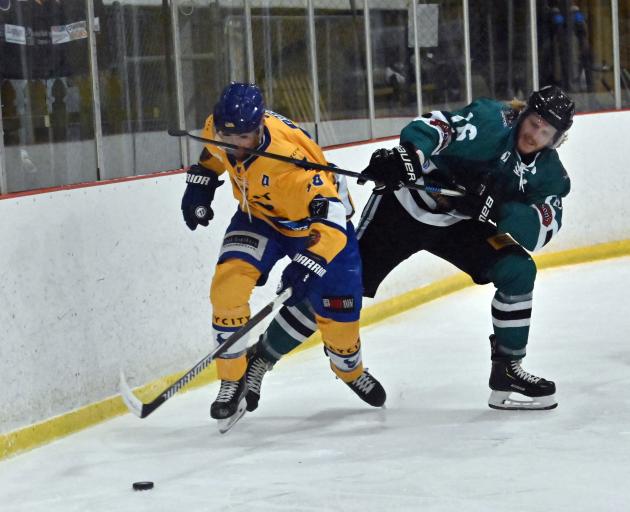 The Stampede's Mitch Frear (front) tussles with the Dunedin Thunder's Paris Heyd for the puck during their match at the Dunedin Ice Stadium on Saturday. PHOTO: LINDA ROBERTSON
The Stampede emerged a convincing winner in the weekend's southern ice hockey derby.

After beating the Dunedin Thunder 6-3 on Friday night, it followed up with a 7-0 win at the Dunedin Ice Stadium on Saturday.

The Thunder put on a competitive showing on Friday, but two late goals from the Stampede proved decisive.

Two well-worked power-play goals to Colin McIntosh and Liam Stewart gave the Stampede a 2-0 lead in the first period.

The Thunder hit back during a power-play of its own 14 seconds before the break.

A great shot from Ben Harford made it 2-1 after receiving the puck from Paris Heyd following a face-off.

That became 2-2 when the Thunder attacked up the right and Jacob Hurring laid the puck off to Parker Evans-Campbell to find the goal.

However, the Stampede showed its prowess and set up McIntosh for another well-worked power-play goal.

Stewart scored his second shortly after, finishing in a scramble close to the goal to make it 4-2.

Evans-Campbell reduced the deficit, again making use of a power-play and scoring after receiving a pass from Heyd.

However, Matthew Schneider gave the Stampede breathing space when he intercepted a Heyd pass to score the visitors' fifth.

Stewart added his third with just over a minute to play to give the Stampede the three points.

It was a far more convincing win for the Stampede on Saturday, as the side showed why it is clear on top of the table.

Stewart scored after just 38 seconds and while that was all the Stampede managed early, the Thunder was unable to get into the game

The Stampede scored four times in the second period - two more to Stewart - before a further two in the third period made it a convincing 7-0.