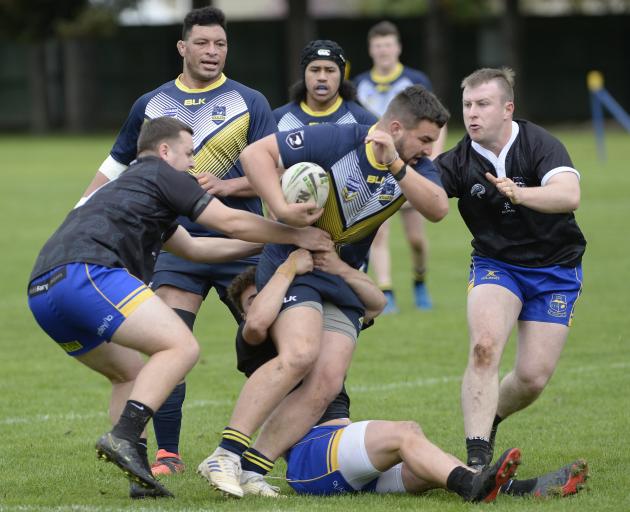 The bigger picture would show every try the Otago Whalers ran in throughout a rampant second half could be crucial.

If points differential becomes a factor, they are now well placed with one week remaining in the scrap for the Southern Zone Rugby League final.

A three-way tie involving the Whalers, West Coast Chargers and Southland Rams for the second spot — presuming Canterbury cruises through at the top — remains a very strong possibility.

Saturday’s 56-4 win over the Chargers at Peter Johnstone Park boosts the Whalers’ chances if that eventuates.

The Whalers’ forwards set the platform in the first half, defending strongly and carrying well.

That opened up space out wide for three long-range tries to give Otago a 16-4 halftime lead.

From there, the backs ran rampant, both winger Tofatuimoana Solia and five-eighth Troy Anstiss scoring hat-tricks as the Whalers ran away with the game.

Whalers coach David Reedy was thrilled with the performance, particularly after a 28-18 loss to Southland in the season opener last week.

The match had been vital to remain alive in the competition, although points differential had also been on the team’s mind.

"We’ve got Canterbury next week, which will be a big game for us. If we play like we did today, we’ll give them a good shot.

"Points differential is huge. That’s why we were aiming to rack up at least 50 [points]. We got there, which I’m happy about.

"Most of that was through our defence. We got that working and then our attack flowed off that.’’

The physicality of the Whalers’ forwards set the tone early, prop Mika Mafi, in particular, gaining plenty of metres with ball in hand.

They took the lead after 10 minutes when electric fullback Tama Apineru ignited a counterattack.

He broke the line from the Chargers’ kick chase, before linking with Solia, who showed his pace to run 40m and score in the corner.

Halfback Cameron Todd set up and scored the second one 10 minutes later, breaking the line and linking with centre Delaney McKenzie, before getting it back and crossing the line.

Another superb break from Apineru made it 16-0. He could have scored himself after breaking the line 70m out, but handed off to Anstiss to score.

The Chargers hit back after a botched kick-off reception left the Whalers under pressure.

They nearly made it two as the Whalers began giving away penalties late in the half.

But the defence was resolute on the goal-line.

It was the key moment in the game and from there the Whalers were in control.

Todd began to pull the strings, setting up several tries both with his ability to put players into holes and to offload in the tackle.

The Whalers began to break the line at will, particularly up the left side, while West Coast struggled to make any impression on the second half.

It was that ability to keep West Coast out that pleased Reedy.

"We kept them to one try for the whole game, so that was good.

"Goal-line defence was better and everyone scrambled and worked for each other, which was the theme for this week — to work for each other.

"We knew if we lost this then all our shot was gone and if the West Coast won it they were through. There was a lot on the line for both teams."