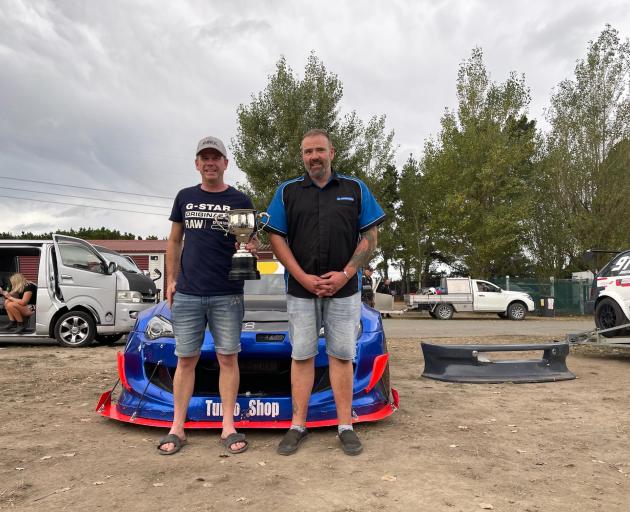 Chris Henderson shows off the spoils after winning the OSCA series. His chief crew Jamie Patrick celebrates with him.PHOTO SUPPLIED
Funny how life works out.

When Dunedin driver Chris Henderson was learning to race 30 years ago it was local driver Steve Ross who helped out.

But the master-apprentice relationship has morphed over the years into a tense rivalry.

They both competed in the Open Saloon Car Association (OSCA) series this year and it was Henderson (48) who eventually emerged victorious.

The series championship was decided on the last weekend of racing at Ruapuna, which was very exciting.

And it was Henderson and Ross who were in the No 1 and No 2 spots jostling for the title.

"We only led by one point going into the last round and we just had a faster weekend than him," Henderson said.

"We managed to see him out in two of the four races and that was enough."

The OSCAs got under way in late October and were staged over six rounds. There were four races in each round.

Initially, there were about 30 entries but that dwindled to around 20 by the final weekend.

"We’ve been right on each other’s tail all season," Henderson said.

That relationship has arguably brought out the best of each but there have been some tense moments as well.

"Ah, we’ve had some comings together but we shake hands at the end of it and we’re good mates.

"We’ve got a bit close and had a couple of rubs. But it is funny because I spoke to Steve and said it is ironic that we are banging heads and banging cars because 30 years ago when I started racing as an 18-year-old it was Steve that showed me a lot of how to drive.

"He actually took me under his wing and helped me. He showed me the race lines and where to pass and how to block people."

Henderson has won titles in the sports saloon and South Island endurance series but this was his first OSCA title.

"I’ve always aspired to go and race in it. So we did it this year and were lucky enough to have a reliable, fast car and got the job done."

The series has been around for about 50 years and was set up to give the "big bangers" an event where they can unleash their horsepower. Drivers can reach speeds of up to 260kmh.