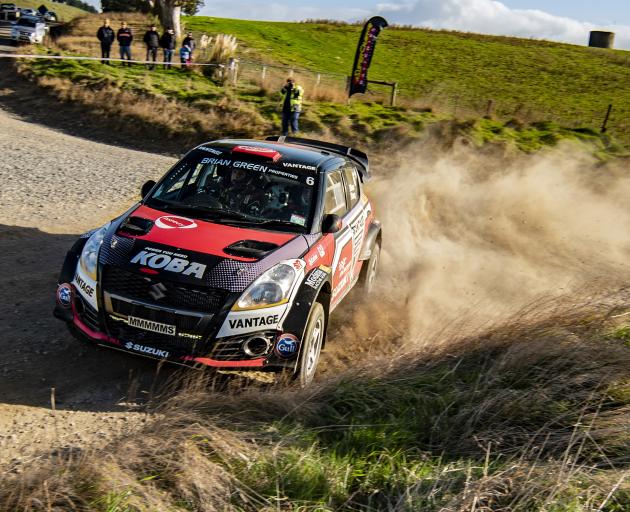 Dunedin’s Emma Gilmour on her way to winning the Otago Sports Car Club’s Circle Hill Rallysprint on Saturday. PHOTO: BECKY LADBROOK PHOTOGRAPHY
Motorsport generally lightens a driver's wallet. However Saturday's Circle Hill Rally-sprint bucked the trend and sent the fastest few away with some dollars in their pockets.

Run by the Otago Sports Car Club, near Milburn, it divided up $1300 in prizemoney between the top three overall, the class winners and the winners of two hard-luck spot prizes.

"For a club sport event that's the best entry numbers we've had for a very long time, no doubt helped by our sponsor SuperCharge Batteries putting up some cash.

"We even had Regan Ross come down from Kaikoura, which is a long way for him to come."

Top honours went to Dunedin rally driver Emma Gilmour, after a battle with Gore's Andrew Graves in his Mitsubishi Evo 3.

After mechanical woes destroyed her national rally championship season hopes, it was rewarding for Gilmour to put in a strong performance in her Suzuki Swift AP4 over four runs through the 7.2km gravel course.

"The way the season has gone, we are now focusing on doing mileage and development for 2020," Gilmour said.

"This event was a fantastic opportunity to drive on some great roads against some tough competition from around the South Island."

Having a "good outing" before the penultimate round of the six-round championship in the Coromandel on August 17 "repays my sponsors, my team and everyone who has put in so much work into the Suzuki", Gilmour said.

Jeff Judd was third in a Subaru Impreza and a storming drive from fellow Christchurch driver Dean Johnston, in his Toyota Starlet, enabled him to seal fourth overall and first in class B.

Driving his Ford Escort, Ross claimed the class C victory, and Tim Smith, of Christchurch, wrapped up the category wins with the fastest time for class A in his Toyota Starlet.