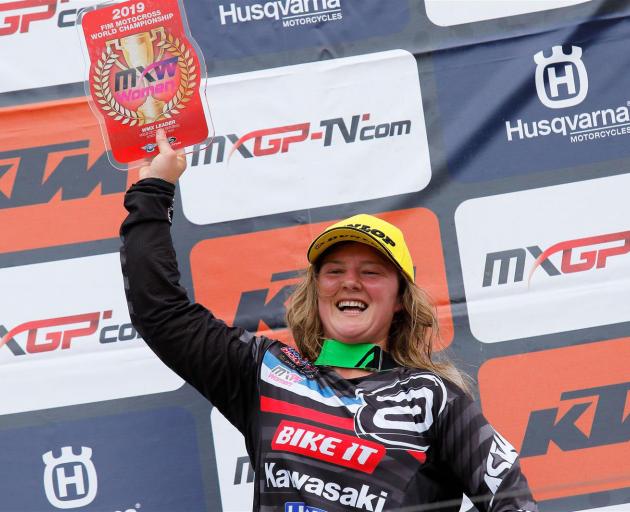 Courtney Duncan celebrates on the podium after winning the penultimate race of the season in Turkey yesterday to claim the Women's Motocross World Championship crown. PHOTO: KAWASAKI EUROPE
The Palmerston Flyer, the Kawasaki Kid - call Courtney Duncan whatever you like but make sure you call her champ.

She produced an utterly dominant performance in Turkey to claim the Women's Motocross World Championship title with a race to spare in the series.

"What a day! What a day! It is indescribable right now," an emotional Duncan said shortly after entering pitlane on her Kawasaki KX250.

Duncan has been the fastest rider on the circuit since her debut in 2016, but her previous bids had always been derailed.

There was a collision with the wandering photographer in 2016, a controversial jury decision in 2017 and a heartbreaking injury which forced her to pull out last year when she had a massive lead.

That last setback was particularly brutal for Duncan. While she never doubted her ability, she did come to the realisation she would need to do something differently this season.

She switched from Yamaha to Kawasaki and joined Dixon Racing Team. Duncan was able to commute home to Dunedin more often and a happy rider meant a faster rider.

Then there was no stopping the girl who grew up in Palmerston racing the boys.

She won seven of the first eight races to establish a massive 23-point lead going into the final round at Afyonkarahisar. Her win early yesterday morning earned her an unassailable lead.

"This goes way back to when I started when I was 7-years-of-age," Duncan said.

"Everything goes into this. So much effort from my family - they did so much for me growing up to get me to this point.

"All my team, my sponsors [and] everyone back over home. I have a huge team at home, and everyone plays a huge part in this championship.

"It was definitely a team effort. I can't thank everyone enough."

Duncan topped qualifying and was able to line up at the gate in a good spot to push for the win.

She had a steady rather than spectacular start and settled into fourth.

Duncan then set about picking off her main championship rivals.

Duncan went wide to get around van de Ven and wobbled in deep rut. It was an anxious moment for the New Zealander, but she kept her balance and then set off after race leader Sara Andersen, of Denmark.

The pair had a nice duel for a while but eventually Duncan's class shone through. She pulled away to win by more than 12sec.

"I don't know how to describe it - the journey to get here has been tough. Man, it's been tough.

"After winning my first pro race on debut [2016], I felt like I couldn't do anything wrong. Since then it's been a downward slope.

"But this year we changed that and we turned it around and made it happen."

That meant the last race at 8.30 last night yesterday was a mere formality - although that did not stop her winning it by almost half a minute.

Duncan will head back to her base in the United Kingdom before returning home to Dunedin next week.