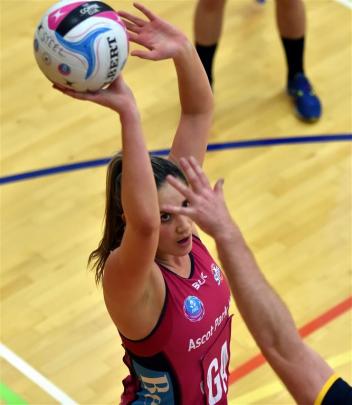 Goal attack te Paea Selby-Rickit lines up a goal during a match against a combined men's side at Columba College earlier this month. Photo by Gregor Richardson.

The Steel played one bad game all year and it was a costly one. Other than that, the southern side was sublime. Reporter Damian George looks back on the record-breaking but ultimately fruitless season.

The season that promised so much for so long ended with a double punch to the guts over the past fortnight as the table-topping Southern Steel reminded us all of the cruelties of finals sport.

After 15 weeks of record-breaking netball, the Steel's ANZ Championship campaign was meant to reach its crescendo over the final few weeks, but it instead faded out to the tune of a job left unfinished.

In the space of 60 minutes, the Steel's three months of dominance in the transtasman competition was made to count for little, as an experienced Waikato-Bay of Plenty Magic side turned up to Stadium Southland in Invercargill and pulled out the big game of which everyone knew it was capable to snatch the New Zealand conference.

It was a bad outcome not just for the Steel, but also for New Zealand's chances of winning the competition.

The Magic is not the side of old and was always going to struggle against the Swifts in Monday's semifinal, and so it proved as the side went down 64-45.

That made the pill even harder to swallow for southern fans as the Steel went to Brisbane and put in a semifinal performance which would have been enough to beat most sides, but its eventual 67-64 defeat to the Firebirds signalled the end of its season.

But that was the bad stuff, and there was far more of the good stuff to focus on.

The Steel went into the 2016 season with little outside expectation but, by the halfway mark, had former players suggesting it could go all the way.

There was little in the first couple of rounds to suggest that would be the case.

It rallied late to beat the Mystics in round one and followed that up with a disappointing draw at home against the Tactix a week later.

From April 17 to June 25, the Steel won 10 matches in a row, making a mockery of its previous record winning streak of four.

It beat the Magic by 10 goals, the Pulse by 13 and the Fever by seven to record a rare win against an Australian side.

It then pulled off just its second win in Australia by beating the Thunderbirds 69-54 in Adelaide, before beating the Pulse and Mystics again and atoning for its draw against the Tactix with an 81-51 thrashing.

The big scalps kept coming. An under-strength Firebirds side was given a hiding in Dunedin and the Magic and Vixens were beaten comfortably.

The Steel arguably saved its best for last, though, holding its nerve to draw with the Swifts 59-59 in Sydney.

This was also the season which saw the coming of age of a number of players.

Gina Crampton teamed up with Silver Fern Shannon Francois to form a dynamic midcourt pairing, defender Jane Watson produced a breakout season at the back and Te Paea Selby-Rickit often stepped up to help out with the goal-scoring burden.

All three were named in a 28-strong Silver Ferns and New Zealand A trial squad announced recently, along with Francois and defender Storm Purvis.

Purvis started strongly but missed the second half of the season with illness.

Defender Te Huinga Selby-Rickit was not sighted for a month but came back to replace Purvis and played some consistently strong netball, while 19-year-old Abby Erwood made her debut in the cauldron of the New Zealand conference final and acquitted herself well.

The question now, as the ANZ Championship era draws to a close, is how many of the Steel contingent will be around to back up next year?

Jhaniele Fowler-Reid will be heavily sought after by the Australian sides and coach Noeline Taurua only enhanced her reputation as well.

Questions for the future
•With New Zealand and Australia forming separate leagues, will the Steel be able to hold on to Jhaniele Fowler-Reid? The word is it might be tough going.

•How much interest will the inaugural New Zealand Elite Domestic League hold? With just six teams and the possible loss of some overseas stars to the Australian league, this competition has some serious drawbacks.

•Is this the start of a bright new Steel era? Aside from captain Wendy Frew, many of the side are still young. If they all decide to hang around, the side could have a bright few years ahead.