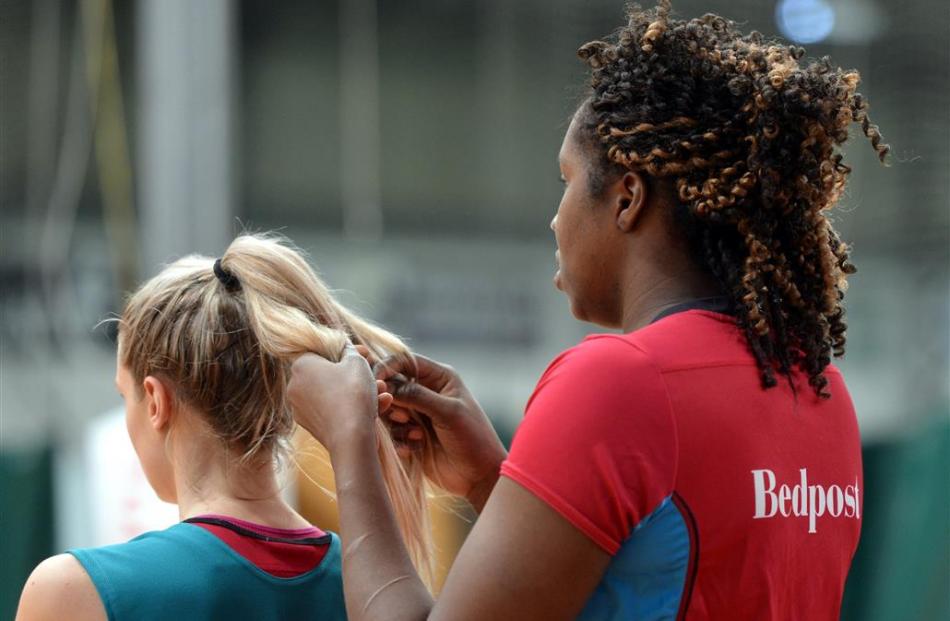 Steel goal shoot Jhaniele Fowler-Reid plaits the hair of team-mate Jamie Hume during a training session at the Edgar Centre this week. Photo by Stephen Jaquiery.

Sometimes what looks like an advantage can actually be a stumbling block - just ask Southern Steel midcourter Gina Crampton.

The livewire wing attack, one of the Steel's most consistent and dynamic performers this season, was on the end of a loss last weekend for the first time in 2016, just when it seemed her side had everything going its way.

The unbeaten side headed to Stadium Southland in Invercargill buoyed by local support and with its sights set on a home playoffs campaign, before the wheels came off.

In reality, Crampton said, the bonuses of home court advantage and a week's rest courtesy of finishing top qualifier were countered by increased pressure and a loss of momentum, as the Steel went down 59-57 to the Magic in the New Zealand conference final.

Speaking to the Otago Daily Times from Dunedin Airport yesterday before flying out to Christchurch, then Brisbane, for its daunting semifinal clash against the Firebirds on Sunday, Crampton said the side was better off for having got back on the court last weekend.

"Coming off a bye didn't go that well for us last time we had it in the round-robin [when the Steel started slowly before overcoming the lowly Pulse].

"We would have liked to keep going along as we were.

"Even though we trained the same and we did have a practice game, we weren't getting the same intensity of playing.''

There were no excuses from Crampton, however. The Steel knew the score and simply did not react well enough to the pressure.

"Our second half was how we would normally play. The first half, or first quarter even, we made some uncharacteristic mistakes.

"It took us a long time to get into our usual game plan.''

On Sunday against the defending champion Firebirds, the Steel has vowed to play with more freedom.

It is a shame the side is now in the "nothing to lose'' category when, only a week ago, it was eyeing up a home final and a maiden ANZ Championship title, but it may be the spark the side needs.

"It's quite nice being the underdog,'' Crampton said.

"There was probably a bit of pressure on us when we hadn't lost and everyone was talking about how we can win the whole thing.‘‘It's quite nice going under the radar this week.

"The game's probably theirs to lose, to be fair, but I still think we can do it.''

The Firebirds certainly do enter the match as hot favourites.

The side has never lost a finals match at home and comfortably took care of the second-placed Swifts in the Australian conference final last weekend.

The two Jamaican internationals at either end of the court will again be key players tomorrow.

Jhaniele Fowler-Reid (Steel) and Romelda Aiken (Firebirds) are the competition's two leading goal-scorers and rebounders, and there should be no repeat of the round 11 clash in Dunedin, in which Aiken was shunted to the defensive end to compensate for late injuries to the visiting side.

Crampton and partner-in-crime Shannon Francois also shape as key players for the Steel if it wants to match the might of the Queensland outfit.

They have not played a bad game all season and have been nothing short of outstanding in getting the ball into the hands of Fowler-Reid.

Crampton is second in the tournament in goal assists and Francois is fourth.

Standout defender Jane Watson has a major role to play as she prepares to disrupt quality ball getting to 1.96m Aiken and fellow shooter Gretel Tippett.

But the real challenge will be controlling the pace of the game in the early stages and not letting the pressure of the occasion result in unforced errors and poor decision-making.