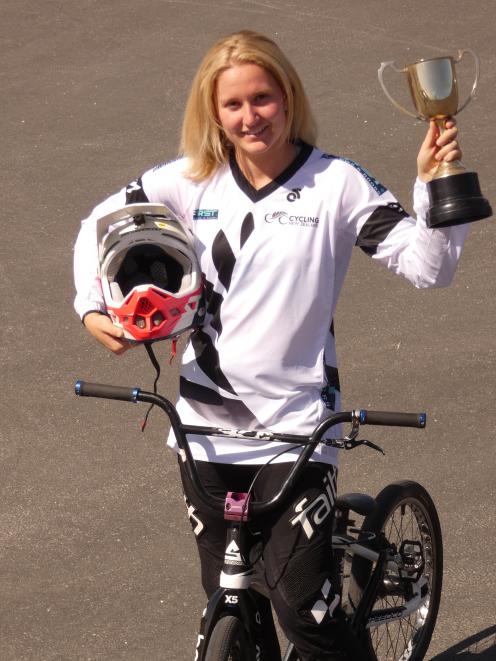 Holly Oldham has reason to celebrate after winning the junior women category at the NZ BMX Championship Nationals in Auckland on Sunday. Photo: Alexia Johnston
BMX champion Holly Oldham is at the top of her game.

Oldham secured the title after competing at the NZ BMX Championship Nationals on Sunday, which earned her two trophies, the junior women’s NZ1 plate and a championship top, which she can wear while competing throughout the rest of the year.

Oldham, a year 13 pupil at Dunstan High School, spends countless hours training about five to six times a week — because she ‘‘loves it’’.

She admits she was a late starter to the sport, only getting into it when she was about 12.

‘‘I did a speech on [Olympian BMX rider] Sarah Walker when I was at primary school, during the Olympic year, and heard about the local club and then just decided to give it a go.’’

Since then Oldham has gone from strength to strength and hopes that continues in the coming weeks as she waits to hear if she has been selected for the World Junior Championships taking place in Houston in May.

Until then she plans to continue her training regime, which includes regular visits to the gym.