Anderson’s US training pays off 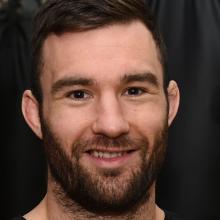 Brogan Anderson
This game is often about levels.

Fight fans were treated to a  mixed  martial  arts spectacle when the Xtreme Fighting Championship (XFC) took place at the Memorial Park Hall in Mosgiel on Friday night.

In the light heavyweight professional main event, Dunedin’s Brogan Anderson was too skilled for Otara’s Mose Afoa, winning via a first-round rear-naked choke.

Anderson  took a hard left hook with about a minute gone.

Backed up against the cage, he covered up while Afoa teed off with a body and head shot.Anderson counter-punched with a clean left hook, dropping Afoa.

The 29-year-old Hammerhead fighter then swarmed on Afoa (Core MMA/Cross fit OFB).Afoa (27) shuffled on his back to the cage, but he could not escape.

Anderson landed some precise left head shots before taking Afoa’s back as he tried to get to his feet and seized  the opportunity to sink in the choke.

It was an impressive all-round display from Anderson, who had completed his fight camp preparation with two months of training at the Jackson Wink MMA academy in Albuquerque, in the United States.  He returned to Dunedin the week of the fight.

It was his first light heavyweight fight since 2014, but with Afoa weighing in 5.4kg over the 93kg weight limit he was virtually fighting a heavyweight.

Anderson was really pleased with the result and said it felt good to get some of the cobwebs out after about a year of not competing, but light heavyweight was likely a one-off.

"Now I just want to climb that ladder in Australasia and I want to get that  No1 spot at middleweight and then get that spot in the UFC," he said.

"That is the goal and I am always working towards that."

Hammerhead MMA/Dunedin won four fights, including Anderson’s, while Hammerhead Queenstown proved it is a force to be reckoned with when it  won two from three.

While the biggest roar of the night came for Anderson, Dunedin’s Leanne Scorgie (Hammerhead) was not far behind.  The 57-year-old put on an inspiring performance when she lost a three-round war of attrition to Queenstown’s Mel Webster.

Sporting a swollen left eye  and cheek bone  the size of a tennis ball, Scorgie said she felt a little bit sore but she had  had fun on what was her birthday.

Dunedin’s Tyla Watt (2-0) impressed with his unanimous decision 75kg catchweight win as he showcased some heavy takedowns, flashy kicks and busy striking, while Queenstown’s James Thompson (3-2) stood out with some clean punching, and in particular lead upper cuts and body shots, in his light heavyweight win.

Other winners were Hammerhead Dunedin’s Ryan Tapsell and Grant Harris.