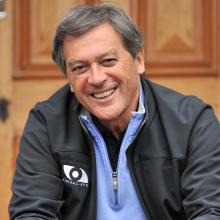 Ian Taylor
Dunedin businessman Ian Taylor and some of his Animation Research Ltd staff will head to Forsyth Barr Stadium next week to start work on ways to help viewers at home when watching a game at a closed stadium.

With no crowd allowed at stadiums, Taylor wants to develop ways and means to make the viewing experience better for those sitting at home.

"We are going to go set up a whole R&D [research and development] centre and see what we can do for crowdless stadiums. So what do we do in Forsyth Barr that means there are no empty seats? You may not have a crowd but you have something else, on screen where most people watch it," he said.

"The first thing you do in a stadium is make sure you cover it better. We could do really good TV coverage if people didn’t turn up, because they get in the road of everything ... and looking at empty seats affects your experience to watch. It is terrible to watch. What can we do at FBS with a roof to make it better and no-one notices there is no crowd there?"

He said making cartoon figures to sit in stands was not an option.

TV coverage could shift to another level. Cameras could be in the roof, create virtual interiors of stadiums, have drones flying round and avatars in the stand. Supporters’ voices could be piped into the stadium through an app they had on when sitting at home.

It was all about creating a better viewing experience.

Taylor and his company had been through the roller-coaster during the pandemic but had made the most of the down time and were now "busier than we’ve ever been".

Taylor had arrived in the United States in early March to oversee the company’s coverage of The Players Championship. The first round was played and went well but that night, Taylor received a text telling him the tournament had been canned because of the pandemic.

Within two hours that night, all his contracts had fallen through with organisations such as the America’s Cup and PGA, and a new baseball contract, as all sports suspended their seasons.

Taylor and his team had to head back to NZ and go into isolation.

But through that has come progress and he is now better placed than before.

Taylor said because his team had time to work, instead of flying around the world, they had made huge technological advances. That meant they would no longer have to be on site for events around the world.

"So instead of sitting in a truck, upwards of 14 people in a Ryder Cup or the US Open, we can all do it from home."

He said coverage of sport would now be less expensive.

"So we have gone from losing everything in less than 24 hours to we are now busier than we’ve ever been. All working from home and remotely."

He said the company’s carbon footprint would also be reduced.