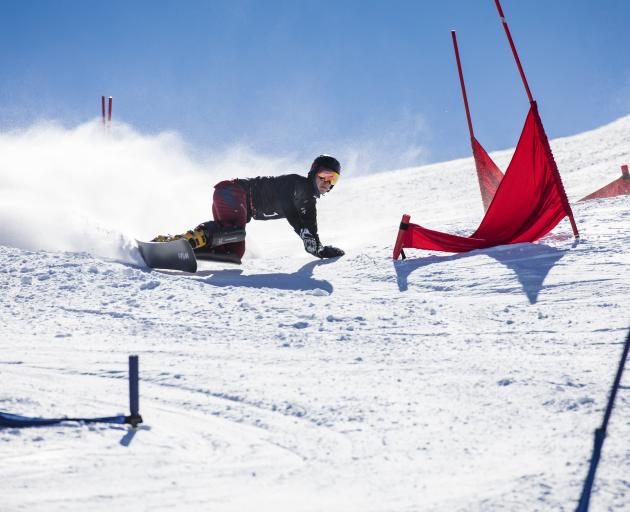 On his way to his second junior world championship title is parallel slalom snowboarder Dmitry Loginov of Russia. PHOTO: NEIL KERR/WINTER GAMES NZ
Two unlikely Kiwis successfully battled it out with some of the world's best in the big air world cup yesterday at Cardrona, to qualify for the finals, to be held today and tomorrow.

On a warm day of qualifying, where neither Zoi Sadowski-Synnott or Carlos Garcia-Knight could successfully land their tricks, it was Wanaka skier Finn Bilous and Makarora snowboarder Corrah Phillips who instead stood up to the task.

Bilous was the pick of the two, nailing a trick he had just learned, a switch triple rodeo 1440, to give him a score of 93.40 and qualify in second spot for the finals.

"I'm pretty stoked to put that down," he said.

He will line up alongside fellow Wanaka skier Jackson Wells in the today's final, which features multiple Olympic and X Games medalists, including Alex Beaulieu-Marchand, James Woods and Andri Ragettli.

In the women's snowboard, Phillips put down two solid runs to secure the sixth and last qualifying spot for tomorrow'sfinal.

Elsewhere at Cardrona, the junior world championships were wrapped up with some tight racing in the snowboard parallel slalom.

Russia dominated proceedings once again, claiming all three medals in the men's field, including the second gold medal in two days for Dmitry Loginov.

In the women's field, Austria's Daniela Ulbing snatched the gold ahead of Russia's Anastasia Kurochkina and Elena Boltaeva.

"It is something special to win the Junior World Championships and I've never done it before, so I'm really happy," Ulbing said.

Across the valley at Snow Farm, there were plenty of United States flags waving as the North Americans claimed all six medals in the 10km and 15km mass start cross-country races.

In the men's 15km event, sprint silver medalist Benjamin Saxton found some more energy in his legs to come out firing and claim the gold.