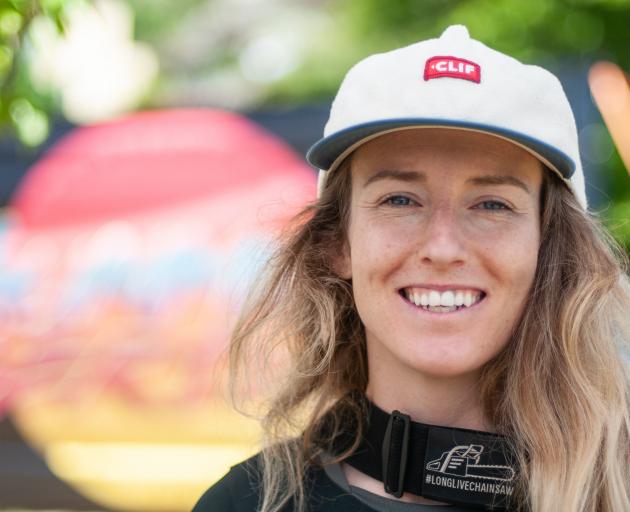 Casey Brown after finishing second in the Alexandra Super D Women’s Pro at Crankworx yesterday.PHOTO: SHANNON THOMSON
It was a homecoming of sorts for professional mountain biker Casey Brown yesterday as competition in the inaugural Crankworx Summer Series started in Alexandra.

The 31-year-old Canadian-Kiwi managed second in the women’s professional Super D — a mix of downhill and cross-country racing packaged together into one 6-12min run — on the first day of competition of the series.

For Brown, the series marks a return to her roots.

Born in Queenstown, and after stints living on the West Coast, Clyde and Hawea, Brown moved to Revelstoke in British Columbia, Canada, in 2002 when she was 11.

It was in Canada she took up mountain biking.

Something about the sport just clicked, she said.

‘‘In 2012 I was back here in Central Otago and Queenstown in what was the first time in a long time.’’

That was the chance to scope out mountain biking here, Brown said.

From that visit on she has been a regular back to New Zealand to watch the sport grow, particularly in Central Otago.

In between times, she was making a name for herself on the women’s pro circuit.

While modest about her achievements, Brown’s pedigree in the sport is impressive, taking part in the world cup, the Enduro World Series and she has been been a regular on the Crankworx World Tour, where she was crowned the Queen of Crankworx twice.

To see the sport take off in the Central Otago and Queenstown Lakes districts was heartening.

‘‘It’s pretty incredible being back in Alexandra. It’s changed so much in terms of mountain biking.

‘‘I have seen it before where you have these towns, like Alexandra, that are just farming towns and then mountain biking takes off and really changes the place.’’

Matangi Station MTB, which officially opens on Wednesday hosted yesterday’s competition and was ‘‘world-class’’, she said

While the Crankworx Summer Series alllowed her to continue riding as the Canadian winter took hold, it also saved her from sports she ‘‘sucked at’’ like surfing, she said.

‘It is very humbling to go into a different sport and not be very good at it. It’s a great leveller.’’