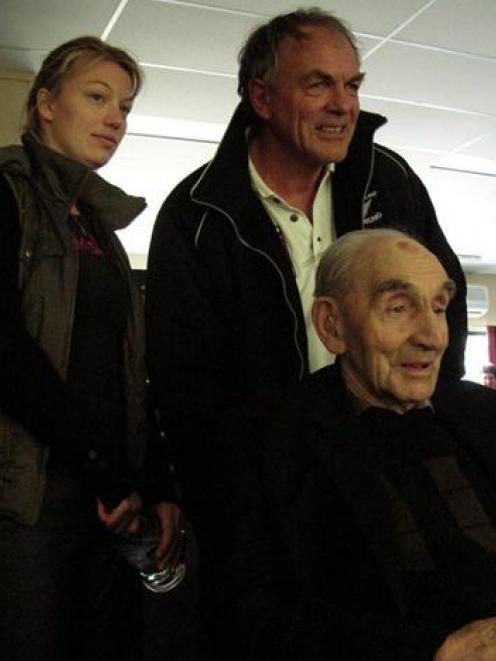 Three generations of the Becker family at the Maniototo Curling International rink in Naseby this week. Pictured (from left) are Bridget, Peter and Jim Becker. Photo by Rosie Manins.
Curling is in their blood. The Becker family have had a huge influence on the development of New Zealand curling.

The family grew up in the Maniototo which, for more than a century, has been the heartland of New Zealand curling.

It started on the outdoor ice rinks on the Idaburn dam but has now been taken indoors to the Maniototo Curling International rink in Naseby.

The Becker influence has been evident at the Pacific curling championships this week, with five family members involved with the New Zealand team.

Sean Becker is skip of the men's team and his wife Cassie is making her international debut in the women's team.

Sean has been a regular in New Zealand teams from 1995 and has been the long-term skip of the men's team.

Sister Bridget has played for New Zealand since 1998 and is skip of the women's team, and younger brother Scott is playing in his second Pacific championships in the men's team.

"I love the curling atmosphere. It is such a social sport," Bridget said.

"It is competitive on the ice but we enjoy ourselves off the ice."

Scott enjoys the camaraderie of the sport.

"I started playing on the frozen dams with my old man," he said.

But that is not all. Sean's father, Peter, is coach of the women's team and is the long-serving secretary of the New Zealand Curling Association.

He has also been a national selector and coach of the men's team and New Zealand delegate to the World Curling Federation and the New Zealand Olympic Committee.

The Becker heritage goes back further, with Wendy's father and Sean's grandfather, Digger Creighton, being a keen curler.

He is now in his 80s and watched the Pacific championships at Naseby this week.

Jim's father-in-law, Bill McConnochie, was also a keen curler on the outdoor ice rinks on the Idaburn dam in the Maniototo.

Jim, who now lives in a rest-home at Ranfurly, watched the Pacific championships this week.

"They all have a lot of ability to play the game and I'm very proud of them," Jim said.

• New Zealand lost to Korea 3-5 yesterday and qualified third in the men's round robin competition behind Korea and China.

Each team had seven wins and the placings were decided on the countback.

New Zealand will play China in a best-of-five series (including the round robin results when each team won a game) of semifinals. The first team to score two more wins qualifies for the finals.

Australia's hopes of getting to the world championships and the Olympics received a setback when Japan beat China 6-5 to finish fourth. Japan, which has two wins in the best-of-five series, plays Korea in the semifinals.

Defending champion China lost just one game and headed the women's points with seven wins to go straight to the final.

New Zealand kept its hopes alive when it beat Korea 12-9 in the morning game yesterday but lost to Japan 8-11 in its final game.

Korea clinched third spot ahead of New Zealand when it outclassed Australia 10-1 in its final game.

Keeping it in the family
The Becker file