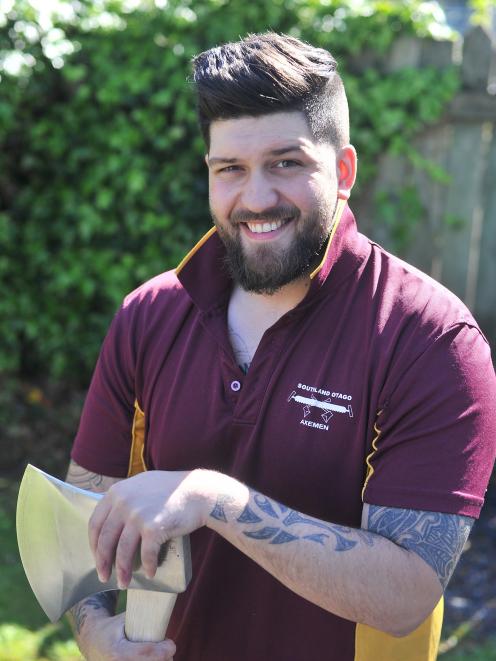 Brad Pako with his axe at his Dunedin home last week. PHOTO: CHRISTINE O’CONNOR
Brad Pako never thought he would be a world champion when his father got him into woodchopping.

Years later, standing on the block in Rotorua after securing his first world title, it was his old man that was on his mind.

It was a death that hit Brad Pako hard, and he took a year off woodchopping following it.

But he knew his father would have wanted him to carry on with the sport.

So, he picked up the axe again, and by 2019 he had entered a golden phase in his career.

Over a three-year stretch, he has won nearly everything there is to win, including the underhand world championship earlier this year.

"That world title in Rotorua, before I jumped on the block I said to myself, ‘come on Dad, help me do this’," Pako said.

"I wanted it so bad and I knew it was the one thing he always wanted to be.

"After winning it, it was a pretty surreal feeling. I knew I won it, but it wasn’t until days later it sinks in that I’m finally the best in the world.

"[Dad] was a big part of that. He got me into the sport. I do wish he had have been there to see that moment. Nothing could’ve stopped him smiling that day — I guarantee it."

A second world championship event in the sport’s Stihl Series had been on the agenda for May in Austria, although it was cancelled due to Covid-19.

It was a long way from 2011, when a 15-year-old year 11 Cromwell College pupil spoke to the Otago Daily Times.

He had just won the South Island under-21 title and was set to travel to Australia with the New Zealand junior team.

Pako said that had been something of a breakthrough year for him, having taken up the sport initially two years earlier.

Rugby and basketball had also figured at that stage, but both fell by the wayside after a head knock.

He has balanced training and competition with working as a truck driver for many of his years.

It is something he has made work well, though.

"I guess the biggest thing is the experiences I’ve had along the way," Pako said.

"Back then, I wasn’t where I am now. I never thought I’d aspire to be a world champ. I definitely had a lot of help along the way through those years."

A "smashed up" hand was limiting his ability to train — and to do virtually anything else, for that matter — at the moment.

He had been spreading gravel and he went to kick a rock which had been caught in his tailgate, forgetting his hand was in the tail gate.

It left him lucky not to lose fingers, and after surgery in early September, he was now in the middle of a long recovery.

He could not make a fist and could grip an axe at the moment. He hoped that would come right by January.

Next, he plans to move to Australia with his fiancee, Alex.

Pako said he might do a few shows over there, but working and making money would be the focus.

He intended to return after "a couple of years".