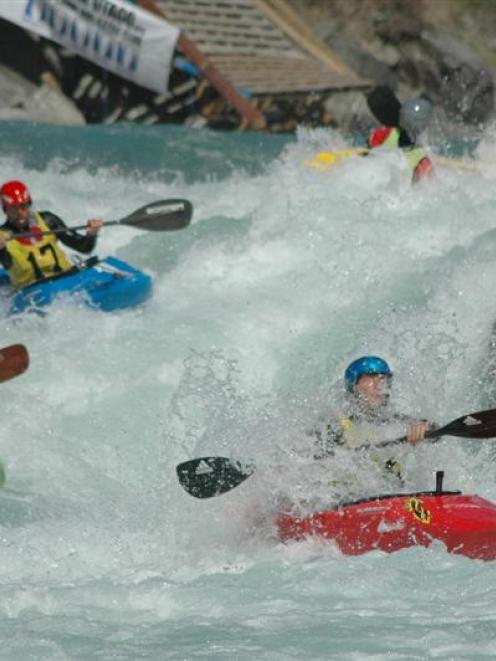 The Extreme Kayak New Zealand Championships usually attract about 60 top-ranked national and international entries, with New Zealanders making up half the field.

Another 100 supporters are expected at the event, which is the decider in a series of three held throughout the country. 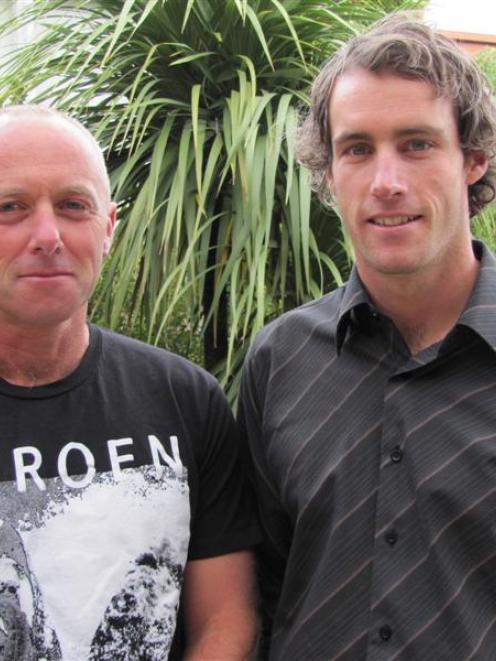 Roy Bailey (left) and Dylan Thomson, both of Wanaka, are organising this year's championships on the Kawarau River on March 10. Photo by Marjorie Cook.
The organisers, Roy Bailey and Dylan Thomson, of Wanaka, said competitors would start in groups of four on a 4m high ramp and should negotiate the rapid to the final gate in about 30 seconds.

The first two across the line progress to the next rounds until the four finalists are found.

Mr Bailey said the challenging Citroen Rapid was so-named because a group of kayakers were driving through the gorge one day in a Citroen car, which broke down.

"They got out of the car and could hear this rumble so they went over to investigate and found the rapid there," he said.

Reigning New Zealand champion Willz Martin, of Rotorua, has entered but Bailey said he did not think the world-ranked Nos 1 and 2 extreme kayakers, Sam Sutton, of Rotorua, and Mike Dawson, of Tauranga, would compete.

Dawson is training for the Olympic Games in slalom while Sutton is concentrating on his rafting business.

Last year's winner, Polish kayaker Lucas Polaczyk, is not thought to be returning to the race.

While extreme white water kayaking is a minority sport in New Zealand, Bailey and Thomson say it is growing.

"I think a lot of the growth is because of the kids involvement in kayaking at school. But like any other sport, once they leave school it is hard to retain them in the sport. But there are good facilities at polytech courses, such as Tai Poutini (Greymouth), Otago Polytechnic and Aoraki Polytechnic in Timaru. They all have outdoor sports courses," Bailey said.

Thomson said the event was the "pinnacle" of New Zealand white water kayaking.

"I think it is like any other sport. Once it starts getting good results, it gets on the news. With Sam and Mike it is now getting more recognised," Thomson said.