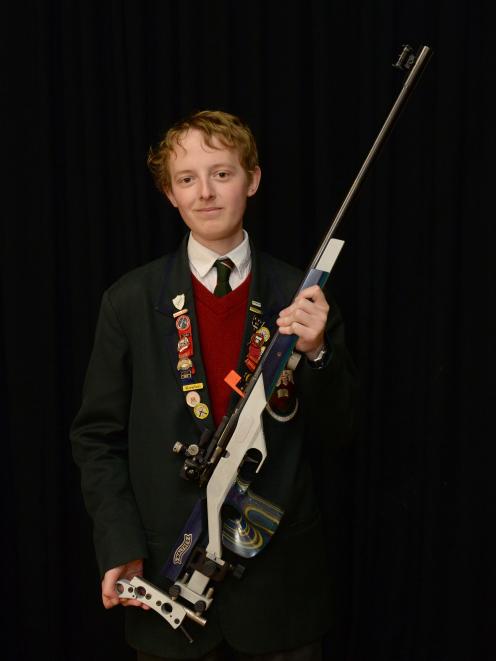 Kaikorai Valley College pupil Shaun Simpson (17) shows off his rifle at the school last week. Photo: Linda Robertson.
You only get one shot — unless you are Shaun Simpson,  who takes his shots in lots of 10.

The year 13 Kaikorai Valley College pupil is a crack shot, too.

He is the Otago secondary schools smallbore rifle shooting (indoor) champion and was selected for the New Zealand junior team for its postal match against  Great Britain.

The 17-year-old took up the sport six years ago when he "rocked up to the shooting range" at St Kilda.

Once he started shooting competitively, he wanted to compete in the secondary school tournament but it was not offered at his school. Undeterred, he approached the school’s sport co-ordinator about getting a team started.

"We get quite a few international people come and try out since they don’t get a chance to try stuff in their own country."

Shaun won the individual title and also won in 2014. He was too ill to compete in 2015, otherwise he  might have had a hat-trick of titles.

In smallbore shooting, the competitors shoot at a target 20m away.

The highest score possible is 100.10.To register a maximum, you must hit the precise middle or bullseye 10 times.

Shaun’s best is 100.7 and he maintains an average score between 94 and 96, which means he competes in B grade.

He was the country’s leading B grade secondary school shooter last year and placed third overall.

He is leading his grade again this year and hopes to come first overall.

Shaun reached one of his goals when he was selected for, and represented, the New Zealand junior team in Rangiora earlier this month.

He is aiming even higher  and would love to represent New Zealand at the Commonwealth Games in outdoor shooting.