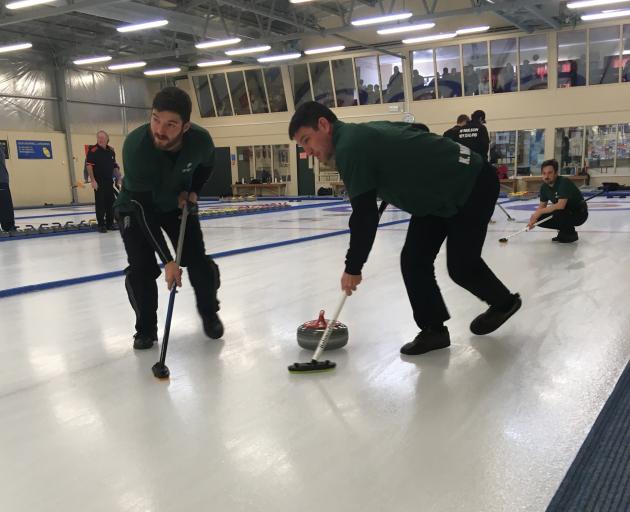 Brothers Tim (31), Kris (30), Sam (28) and Willie Miller (26), alongside Dunedin's Warren Kearney, comprised one of eight men's teams at the championships which began on Friday.

An additional four women's teams were also gunning for a national title.

Kearney and the Miller brothers have all competed nationally at various points.

However they had not played competitively for many years.

Not since high school had the four brothers lined up together on the ice, Kris Miller said.

"It's rare. I think we competed as a four at some high school competition."

"There's always combinations of us playing together."

The four brothers were never on the ice at the same time as Kearney covered for Sam during the opening day of round robin play.

He again slotted in during the next day as youngest brother Willie was playing for Maniototo in the Central Otago club rugby competition.

Although they missed out on playoff spot, they pushed the New Zealand junior men's outfit of Matthew Neilson, Anton Hood, Ben Smith and Hunter Walker for periods of their marathon round robin encounter on Saturday.

Kris, now based in Christchurch, said it was about keeping things simple.

"We tried not to get too worked up about it and keep things basic.

"The first couple of ends we were comfortable and then they managed to steal a big three which put us down."

Although they got themselves back into the match at the fourth end, their younger counterparts eventually won 10-6.

There were other families in action, among them Scott Becker and nephew Will - the latter skippering a high school team - and Bridget Becker and sister-in-law Cass Becker.

Siblings Ben and Jess Smith, fresh off a mixed doubles title last month were also in action, alongside their cousin Courtney Smith.

The event concluded yesterday as the juniors were beaten 4-2 by Peter de Boer, Kenny Thomson, Jamie Chisholm and Phil Dowling in the final.

The Beckers clinched the women's title alongside Thurlow and Eloise Pointon, winning the final 5-3.

National selectors were using the event to select the men's side for the Pacific-Asia Championships, scheduled for China in November.