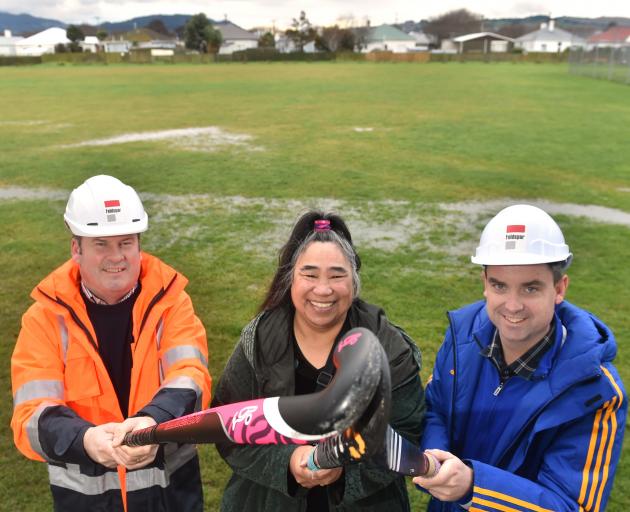 Looking forward to the construction of the hockey turf at King's High School are (from left) King's High School board member Dave Booth, Dunedin City councillor Marie Laufiso and Otago Hockey Association general manager Andy McLean. PHOTO: PETER MCINTOSH
All the boxes have been ticked and the stars have aligned — the third hockey turf in Dunedin is soon to be a reality.

The final approval has been given to the facility which will be built at King’s High School, beside the indoor cricket nets.

The project was first floated in 2016 and work had been continuing since then. But the final sign-off has now been achieved.

As it had to be built in warmer and drier times, the construction would begin in September for the hockey pitch-sized turf, and it was hoped to have it operational early next year. It was being built by Tiger Turf, using New Zealand contractors.

Otago Hockey Association general manager Andy McLean said the turf was a real bonus for the sport and the community.

"Hopefully now we can get rid of those late night starts in the middle of winter. The turf gives us more accessibility and more opportunities for people to play the game," McLean said.

"It will also help us to draw more games to Dunedin. For most significant national tournaments, three turfs have to be available and with the addition of this one we will be able to cater for more events."

King’s High School board member Dave Booth said the school — the proud owners of the Rankin Cup, the premier national schools tournament — was pleased to be able to house the third turf in the city. It would enable the city to host major school tournaments and would also be able to be used by the wider community.

Dunedin City councillor Marie Laufiso said the council was always pleased to help out the South Dunedin and sporting communities.