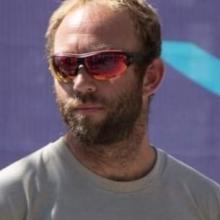 Mark Hardman
He finished 125th out of 150 at the world champs in Montenegro, but came home with a medal anyway.

Cardrona paragliding pilot Mark Hardman was one of a three-man New Zealand team which also included Louis Tapper, of Queenstown, and was having his first crack at the Federation Aeronautique Internationale (FAI) world championships.

Races involved pilots navigating their way around cross-country courses of between 80km and 130km, side-by-side with the other paragliders - "similar to a sailing race".

"With 149 gliders flying around you, it's quite intense."

Hardman said he did not go to the event with any expectations, and therefore was not disappointed with his placing.

However, he was delighted to receive the FAI air sport medal awarded to individuals or groups for "outstanding services" to air sport activities.

Hardman started paragliding in 1997 at the age of 16, and the FAI recognised his dedication as a pilot, teacher, organiser and official at club and national level since then.

At the 2018 national paragliding championships in Wanaka, Hardman landed his glider near a badly injured pilot to provide first aid and co-ordinate a rescue.

The FAI citation with the medal recognised this as a "lifesaving" display of "exceptional skill and presence of mind".

He is a past president of the Southern Hang Gliding and Paragliding Club.

The club is the biggest in New Zealand, having about 365 members, and president Tim Brown said Hardman's medal was not something given out regularly or as a result of a recommendation.

"Someone in the FAI has been looking at, or keeping an eye out for suitable candidates and Mark has caught their attention.

"It is certainly a credit to him, the club and the greater flying community to have him singled out unexpectedly, but not surprisingly, for his contribution."