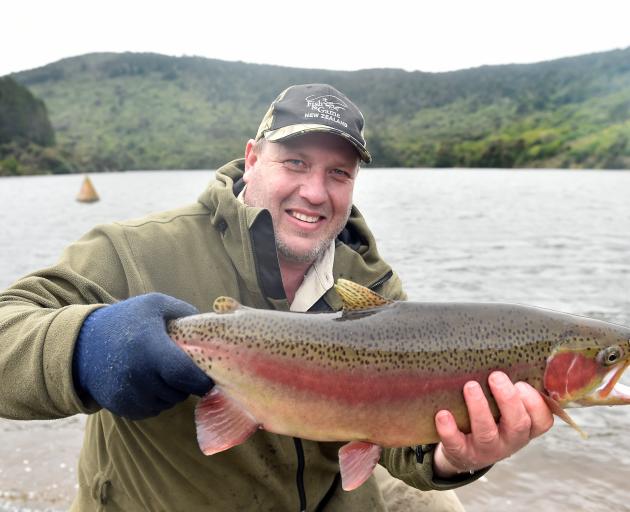 Otago Fish & Game Council field officer and hatchery manager Steve Dixon prepares to release a rainbow trout at Sullivans Dam last year. Photo: Peter McIntosh
I mentioned last week that I was getting some practice in for the season by fishing on Thursday. We are lucky in being able to fish year round on our doorstep, as Sullivans Dam is open all year for fly and spin fishing.

My Aussie friend Wayne repeated his success of last year and soon landed a nice trout on spinner. There were odd fish rising to hold our interest and mid-afternoon one trout rose too close for its own good and grabbed a water boatman imitation that dropped into the water close to it. The fish, when weighed a few minutes later, was 3kg - good practice, indeed.

On the real day, Monday October 1, Murray Smart and I drove to Maniototo, as our preferences further south, Waipahi, Mataura or Pomahaka, were on the high side for good fishing. It was quite foggy in places but not too cold, but turning the corner into Maniototo at Kokonga the temperature dropped to 4degC.

When we arrived at Mathias Dam it was foggy but calm. We quickly tackled up and hit the water. The dam was full and very clear, with not enough weed to be a nuisance. There was a surprising lack of midges on the water, as they tend to hatch first thing in the morning or late evening. That probably accounted for the lack of rising fish as they have to have something to come up for. I tried a few favourite spots, covering the whole of the southern shore. George McInness, who had arrived just after us, was fishing across from me and he landed a nice brown trout. Soon after, I landed one as I fished back through the water I had already covered. It had risen close to me and took my damsel fly nymph immediately. A few minutes later the same thing happened with a second fish. As I walked back to the car for lunch I spotted Murray who looked as if he was stalking a fish. A sudden lift of the rod and a splash confirmed the fact.

Back on the water after lunch, I observed a phenomenon that is not usual on a still water - a fall of mayfly spinners. May flies frequent running water but as there is a race that runs into Mathias they had hatched out there as duns, then taken refuge in the willows, split their skins and transformed into spinners, the mature stage of the species. The wind had carried them over the water where they laid their eggs, which would never hatch out due to lack of flowing water. But the trout did not mind this and rose to them. Then the wind rose and the spinners disappeared but not before giving away their position. I fished the damsel fly nymph through the area and hooked three fish, but landed only two of them. Shortly after, the wind swung round 90 degrees and I did not see another fish, so it seemed an appropriate time to go home after a pleasant start to the season.

Autumn can be rewarding time for anglers

Darkness falling earlier can be useful for fishers

Getting hooked on angling

Dams worth a look