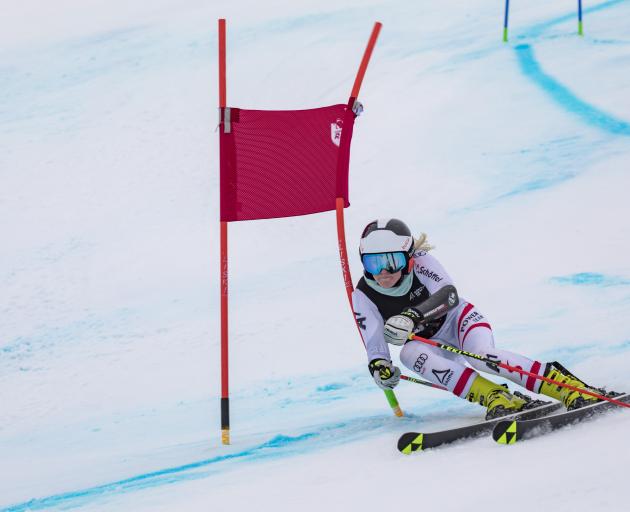 Photo: Neil Kerr/Winter Games NZ
The chance to grab back-to-back gold medals in the giant slalom at Coronet Peak disappeared in the blink of an eye for a mightily disappointed Alice Robinson.

The 16-year-old Queenstown skier dropped in to her second run just outside podium position, but a combination of flat light and soft snow proved to be too challenging.

A missed gate meant she did not finish and was ruled out of medal contention.

''I came over into the gully section and because of the soft snow, my outside ski got caught and I tried to get the line back. But I hit a rut that jumped me out of the course pretty much.''

She wryly said she was ''just a little bit'' disappointed with the result, but admitted she was not skiing as well as she had done on Monday.

''I think [on Monday] I had a bit more of a better set up with the equipment and things and I think today with the soft snow I could've adjusted my mindset a bit more, laid off a bit and focused on how to ski the conditions a bit better.''

Top honours went to Austria's Katharina Truppe. Poland's Maryna Gasienica-Daniel finished in second, while Lena Duerr, of Germany, claimed her second bronze in as many days.

Wanaka based skier Piera Hudson, of Havelock North, could not quite sneak on to the podium, finishing in fourth.

In the men's competition, Belgium's Sam Maes stepped up to claim the gold, while Mathias Graf, of Austria, and Matthias Roenngren, of Sweden, rounded off the all-European podium.

Racing continues today with the first day of slalom on the same mountain.

Robinson said her goal was to ski consistently over the two slalom races this week as her slalom racing had been inconsistent in the past.

Elsewhere, the snowboard cross team event was cancelled at Cardrona yesterday due to low visibility. It will not be rescheduled as there is no time to run it at a later date.