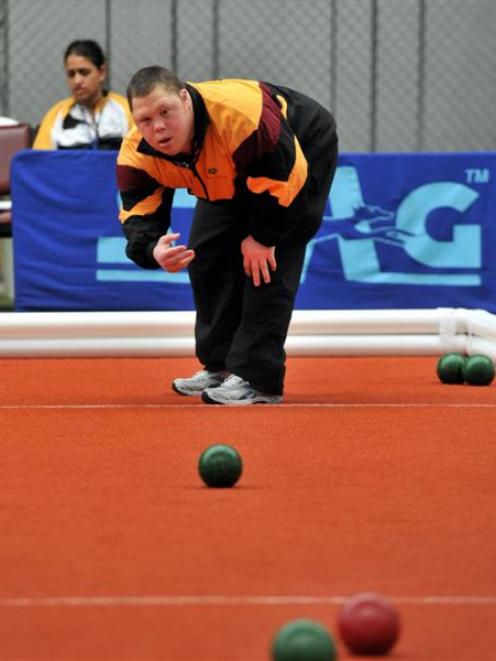 Dan Joyce attacks the jack in the bocce competition at the Edgar Centre. Photo by Gregor Richardson.
Dan Joyce just loves to win. He did it again this week as a member of the North Otago bocce team at the Summer Games.

His aggressive play helped North Otago beat Wellington 8-7 in a tight game at the Edgar Centre.

Joyce has only been playing bocce for a year but has already developed a solid skill base that helped his team in tight games.

It was needed against Wellington, because North Otago looked like frittering away its big early lead, as the Wellington team of Trevor Heatherington, Nina Anisimova, Adam Gibbs and Richard Adlington fought back on the last three ends.

Joyce has been involved in Special Olympics for over six years. He was a member of the New Zealand ski team that competed in the United States five years ago and won a silver medal in the giant slalom.

His father, Noel Joyce, the manager of a security company in Oamaru, is manager of the North Otago Summer Games team and coach for bocceHe has been involved with Special Olympics for 13 years and it started with the ski team.

''The Summer Games is the culmination of four years of training,'' Noel Joyce said.

''The bocce team has been training seven days a week leading up to the Summer Games. The swimmers virtually train 52 weeks a year, as do the tenpin bowlers.

''This has been their target. They want come here and do well. But I don't really care if they win or lose. Socially mixing with other teams is what they look forward to. A lot of them will be looking forward to the party and dance disco on Saturday night after the closing ceremony.''

The 13-strong North Otago team is competing in bocce, swimming and tenpin bowling.

Special Olympics is strong in North Otago, with 40 athletes overall, and they punch above their weight.

''Fund raising is the committee's biggest hurdle. We have no funding from anywhere else and rely on selling firewood and sausage sizzles.'' 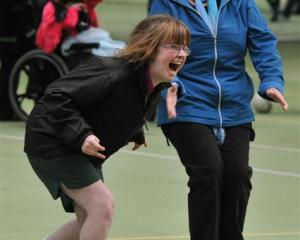