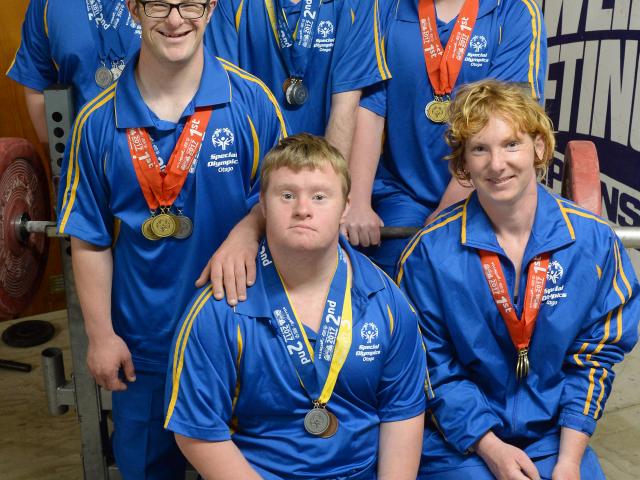 They did it for their son and foster brother. Petronella Simonis-Todd and son Petrus Simonis displayed a Spartan determination as they mastered the Dunedin hills.

David Johnson (Timaru) typifies what the Special Olympics is all about - the joy of competing and the exhilaration of winning.
Clayton Marr (Nelson) is not as big but has aspirations to be as strong as the Hulk.

Dan Joyce just loves to win. He did it again this week as a member of the North Otago bocce team at the Summer Games.

Simon Scaife gave the Wanaka equestrian team a flying start when he won a bronze medal at Telford yesterday.

Robery Robinson (Hawkes Bay) is a novice golfer but he proved he can foot it with the best by qualifying in the National Summer Games golf skills yesterday.

New boy Luke McDonald was one of the stars of the Allenvale School basketball team that had a big win in the National Summer Games yesterday.

There is nothing like the Olympics to bring out the best in people.

The sound of medals jangling together in his bedroom inspires Michael Thornhill (North Taranaki) to keep competing in Special Olympics.

Kelvin McHardy is looking forward to using his expertise as a volunteer for the National Summer Games next week.

There was plenty of action at the Special Olympics football ribbon day at the Edgar Centre in Dunedin yesterday.

Straight off the plane from South Korea and Wanaka's gold medal-winning Special Olympian Morgan James is thinking about her next big challenge.

Lawrence athlete Liam Smith was the star of the Special Olympics regional summer games in Dunedin at the weekend.

Game On Everyone, a new recreation club for Upper Clutha people with intellectual disabilities, hopes to improve links between sports clubs and families so members can have more opportunities for achievement and competition.

A senior sergeant with the Dunedin police, Brian Benn is used to dealing with some wily customers, but his latest undertaking with Special Olympics will see him really getting in on the action.

Katrina Hewett is on the verge of becoming a double Olympian.