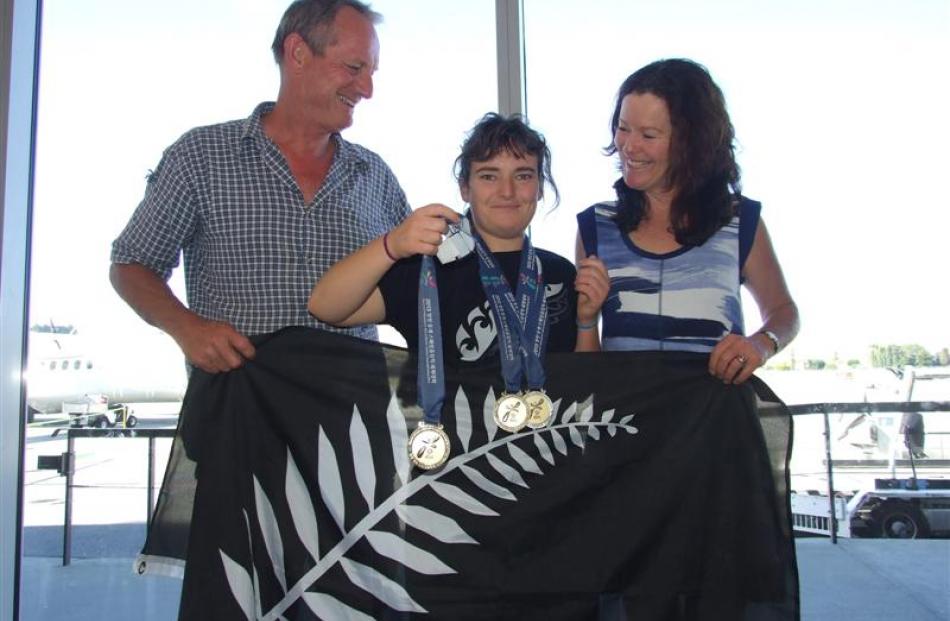 Morgan James shows off her three gold medals, watched by her proud parents Bruce and Sally James, after returning to New Zealand yesterday from competing in the Special Olympics World Winter Games in South Korea. Photo by Christina McDonald.

Straight off the plane from South Korea and Wanaka's gold medal-winning Special Olympian Morgan James is thinking about her next big challenge.

The 21-year-old has just arrived back from three weeks of tough competition at the 2013 Special Olympics World Winter Games, held in temperatures of about -18degC.

She won three gold medals, an effort her parents, Sally and Bruce James, were absolutely ''stoked'' with.

Miss James' parents met her at Queenstown Airport yesterday, Mrs James having arrived from South Korea on a different flight earlier in the day.

''She's had the time of her life. She has had a truly wonderful time.''

More than 2500 athletes from throughout the world took part in the Games and Mrs James said it was one of the best events she had attended.

''Anyone with a special-needs child - they need to get involved in the Special Olympics.

''The love, the joy, the sharing - it has been the ultimate of the human capacity, really.''

Although Miss James was buoyed by her successes, winning was secondary to the overall experience for her daughter, Mrs James said.

''It's not just about winning medals - it's about inclusion.

''It's about acceptance and being treated like normal people, really.

''Every day over there just about brings tears to your eyes - I am just about getting tears now.''

After snowboarding for seven years, Miss James is now eyeing a medal in Dunedin, this time on a horse.

She has qualified for the Special Olympics National Summer Games, to be held in Dunedin in November.

''Her next goal is to have enough money to buy her own horse ... because she is quite competitive.''

The performance of the team was ''absolutely fantastic'' and included personal bests for all athletes despite some suffering a gastro bug and injuries, Mr Benn said.

''All you can ask is for these guys to give their best and that certainly did that.