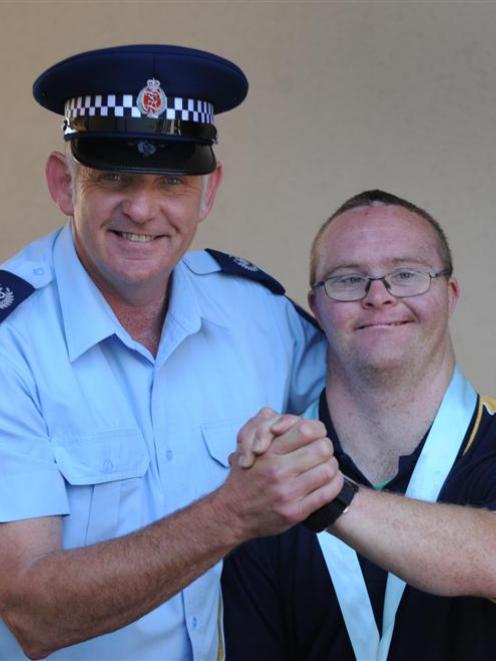 Snr Sgt Benn has been selected as the head of delegation for the Special Olympics World Winter Games in South Korea next year, leading a team of five coaches and 10 Kiwi athletes.

The games take place in PyeongChang in February.

Snr Sgt Benn's friend and fellow police officer, Constable Stew Hewett, of Oamaru, will also be there, one of 100 police officers and athletes from around the world who will carry the Special Olympics' torch through various South Korean towns and cities on its way to the Games' opening ceremony on January 29.

Both men have been volunteers with Special Olympics for more than 20 years.

"It gives you a great sense of what is important. These guys get over so many difficulties and they do it with style. They don't whinge and grizzle - they just get on with it. It's quite refreshing."

This will be the third time he has gone overseas with Special Olympics New Zealand.

He spent a week in PyeongChang last month with heads of delegations of the 126 other countries attending the games, familiarising himself with the various sports' venues and the city, which will also host the 2018 Winter Olympics.

Three of the New Zealand athletes chosen to go to Korea are from Otago - Constable Hewett's daughter Katrina Hewett, of Oamaru, her boyfriend, Hugh Brown, of Waitati, and Morgan James, of Wanaka.

The Otago connection does not stop there for the New Zealand team. One of the coaches is Constable Lynne Donaldson, of Queenstown and Noel Joyce, of Oamaru is the assistant head of delegation. A group of supporters will travelling to Korea, including Mr Brown's mother Claire, and his brother Jock, who now lives in Norway.

There would also be many others in Otago supporting the athletes and coaches, especially as $10,000 had to be raised for each athlete to attend, Snr Sgt Benn said.

Mr Brown (24), who has his full driver's licence and works two days at week at a chicken farm, will compete in the giant slalom, slalom and downhill events at the games.